The Life and Times of AC

IT IS MY GREAT PLEASURE to welcome old and new friends to the long-awaited relaunch of Adrian Chambers Motorsports.  My objective always is to promote motorsport wherever it might be. To do that successfully,

I would be grateful for your support, and that of your friends, with regular emailed information input (dot points are fine), high res pics (300kb minimum), and those all-important pic credits.

As many of you know, I’ve been a journalist since the early ‘60s. I did my AJA cadetship at the Launceston Examiner in northern Tasmania and Queensland’s Gold Coast and have worked in television, radio, print and, since 2016, online.

During the tumultuous mid-’60s and early ’70s, I was NSW correspondent for the old Brisbane Telegraph, based at the Sydney Morning Herald building in Broadway. It was one seriously exciting time to be working as a journo in that extraordinary city.

I then sold my Woollahra home (one of many dumb decisions in my life) and took off on a whim to go sailing and adventuring, based in Puerto Jose Banus, in Franco’s Spain.    Crazy, but immensely rewarding.

I returned to Australia, was headhunted by the remarkable Lang Hancock, and worked in the political scene in Perth with the legendary Sir Charles Court‘s WA Coalition Government.

A change of tack and, for nine years, I was executive director of the PGA of Australia (WA), based primarily at Perth’s superb Joondalup Country Club.

For the past 20 years, I’ve been involved with motorsport including an informative 10 years as general manager of the WA Sporting Car Club, custodians of Barbagallo Raceway – WA’s premier motor racing venue. I managed to have a couple of books published along the way.

” I am particularly honoured to have served for some years as a commissioner on the Australian Motor Racing Commission, then the peak body for provision of advice to the Board of the Confederation of Australian Motor Sport regarding all matters related to the discipline of four-wheeled motor racing.”

I’ve been privileged to work with wonderfully talented people, some of whom are no longer with us. I’ve learned a great deal, and I shall never forget them.

Before embarking on my online odyssey, I enjoyed five years as motor racing columnist with The West Australian – this great State’s major metropolitan newspaper.

Originally from London, UK, I studied at Sydney-based Australian Film, Television and Radio School and Perth’s Murdoch University.   For the past 40 years, I’ve lived in Western Australia, overlooking the Indian Ocean at my home at Ocean Reef, on Perth’s stunning northern beaches.

The help of great mates

I am grateful to my good friend Bert van Zuylen for setting me along the rocky path to this venture.

And to my dear mate Allan Letcher who has supported me during the past 18 months or so when the promised rebuild seemed to be going from bad to worse. Not much fun, but King Al was there to keep me sane.

During August this year, I really considered whether ACM was a pointless exercise. Then in early September, I chanced upon an Indian IT group called Red Lemon Digital. The professional help, patience, and guidance RLD has displayed – dealing with a self-professed IT dummy – since they took over my broken site has shown me what a team of committed professionals can achieve.

To Manish Singh, Devopriyo Das and Pradeep Yadav you and your guys have renewed my faith in myself and given me back my Mojo! 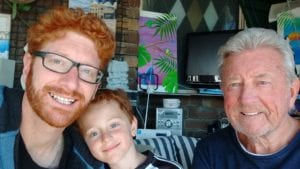 MY THANKS AND LOVE especially go to my wonderful sons pictured here with the “Old Boy” – Robbiesam (with my delightful grandson, Jordan) and Sebastian (above, with me and the very charming Daniel Ricciardo).

My three boys were instrumental in returning me to good health during interesting times in recent years. I am immensely proud of them. They continue to be my towers of strength.

Best regards to you all.