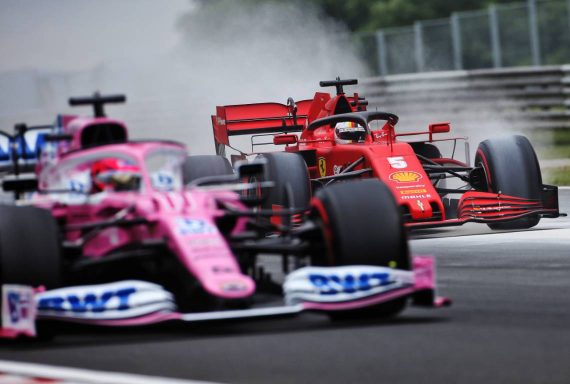 On the Eve of F1’s 70th Anniversary

LIKE ME, you may well find it difficult, even incomprehensible to understand how the governing body can so severely spank Canadian Laurence Stroll’s Racing Point – docking the team 15 precious F1 Constructors Championship points and fining each of their two cars 200,000 euros – yet still allow them to continue using the offending brake ducts during 2020! I’m very interested in what you think.

The FIA Sporting Regulations are necessarily complex, requiring a veritable phalanx of lawyers to determine their outcome when applied to the intricacies of the magnificent sport of Formula One.

So it comes as no surprise that Ferrari has appealed the extraordinary decision – even on the very eve of the sport’s platinum anniversary weekend at Silverstone. McLaren and Renault were quick to follow the lead of the Italian powerhouse in appealing.

But there remain two outstanding surprises so far this season – the Scuderia’s appalling performance and the remarkable improvement of Racing Point.

The process now allows Ferrari 96 hours to formalise their appeal and gather evidence before submitting a case to the FIA’s International Court of Appeal.

“We can confirm we have just stated our intention to appeal against this morning’s FIA Stewards’ decision regarding Racing Point.”

The “tip of the iceberg”

“But at the moment, I think looking ahead and looking forward, it’s something we need to clarify.

“I don’t think the verdict of today (Friday) is sufficient because again it’s only relative eventually to the brake ducts, but not the entire concept.

“As Zak said, I think it’s only the tip of the iceberg, but there is much to discuss further.”

“I think it’s (the verdict) thrown up a lot more questions than answers and there’s new evidence that we now have been able to see. And it’s something we too will review quickly and understand the appeal process and whether that’s something we want to potentially participate in,” Zak said, before joining the appeal.