Baku Back on Track in Azerbaijan 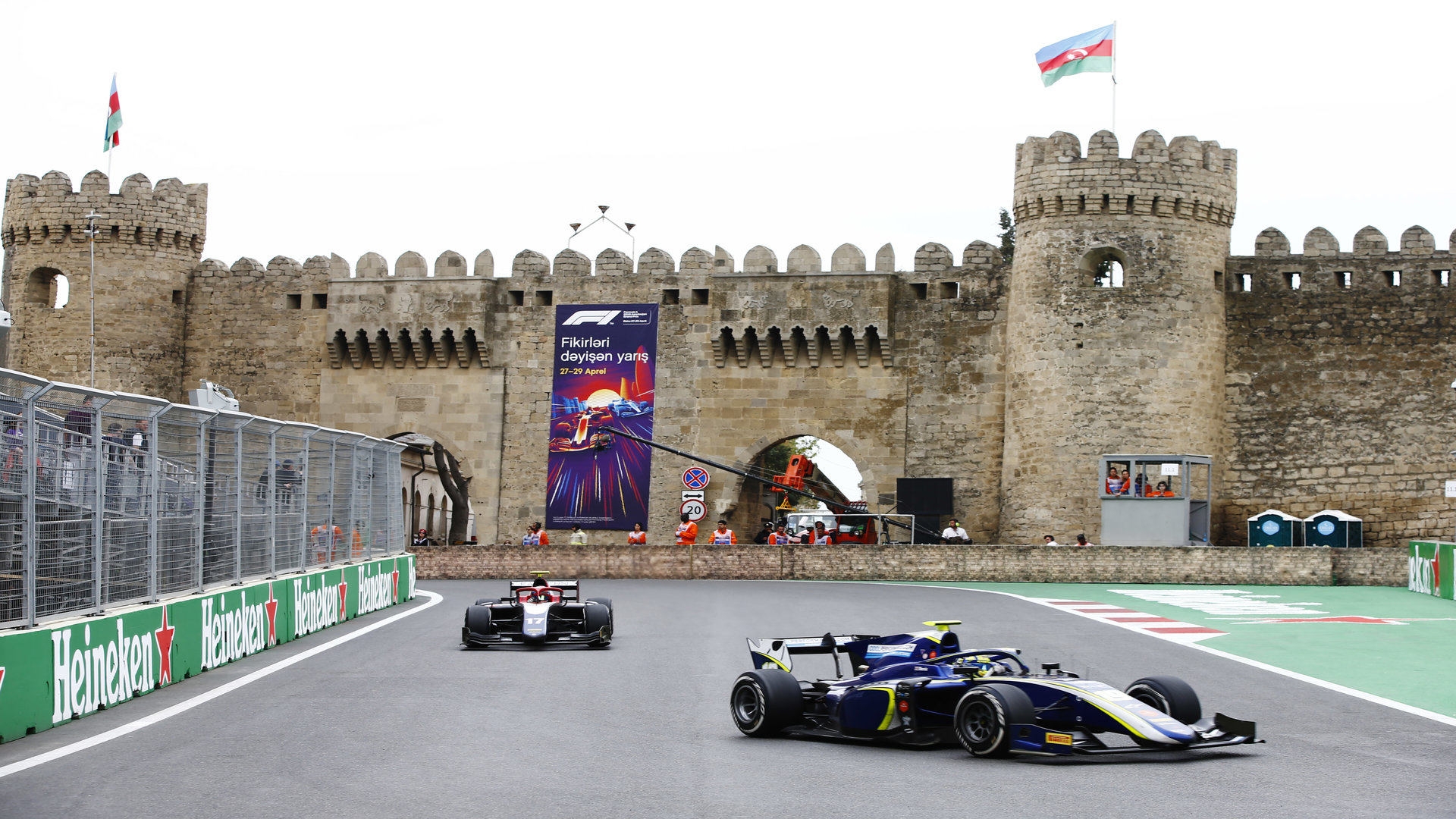 BAKU has been described by drivers in the past as having the complexity of Monaco with the speed of Monza. Perhaps that’s a tad too trite, but it’s a good indication of the nature of the charming Azerbaijan capital’s fastest and longest street circuit on the F1 calendar, from the pilots’ perspective.

The track surface is one of the less aggressive in terms of asphalt roughness and does not take a lot of energy out of the tyres, according to Pirelli racing boss Mario Isola.

And that’s why he and his crack team have made the softest compounds in the range for the first time an optimal choice.

“We made this choice to introduce an extra strategic element,” said Mario. “Last time here, the hard compound wasn’t used at all during the race. Going a step softer now brings the hard choice into play and encourages more variety in the strategies.”

The Unforgiving Barriers of Baku

Baku has all the characteristics expected from a street circuit: a ‘green’ and slippery surface that is likely to evolve quickly, especially as it has not been used for two years.

The barriers are unforgiving and it’s also extremely narrow at Turn 9. Elevating the likelihood of a safety car affecting race strategy.

The winning strategy last time here was a one-stop soft-medium, used by the top four. Charles Leclerc finished fifth for Ferrari by doing the opposite: medium to soft (plus a second late stop for more softs to set the fastest lap).

There was quite a wide pit stop window, with some long stints seen on the medium C3 tyre (now the hard for this year’s race) in particular.

Challenging, where Anything can Happen

“From one unique circuit to another: Baku provides a very different test to Monaco, but the precision needed to stay out of trouble is similar.

“For the first time we bring the very softest tyres in the range to Azerbaijan, as also seen in Monte Carlo. The reason for this nomination is that the hard wasn’t used at all in the Baku race in 2019, whereas the medium was used extensively.

“By re-aligning the nominations, we hope to see all three compounds playing an important role and leading to some different strategies.

“In Formula 2, there’s a step between the compounds, just as was the case at the opening round in Bahrain.

“This creates a bigger differential between the tyres, and again leads to some entertaining racing and tactics, on a challenging circuit that’s renowned for being a place where anything can happen.” Mario Isola, Pirelli’s Head of F1 and Car Racing.

Formula 2 Back at Baku

Formula 2 – featuring Aussie Oscar Piastri (pictured above), sitting second on the championship points table, and Kiwis Liam Lawson and Marcos Armstrong – returns to Baku as round three of the FIA series, with 18-inch tyres there for the first time.

The P Zero Yellow medium and P Zero Purple supersoft tyres have been selected, providing quite a big performance gap between the two compounds and adding to the strategic variables. This will be the first time that the medium compound is run in Formula 2 this season. The medium was redesigned this year for improved graining resistance and the performance gap compared to the supersoft has increased slightly.

Pirelli’s 2022 18-inch Formula 1 test programme continued last week with two days of wet tyre testing at Paul Ricard with Ferrari drivers Charles Leclerc and Carlos Sainz. On both days the 18-inch intermediates were tested in the morning, before switching to full wets in the afternoon,

A rookie error in Pit Lane resulted in a penalty and wrecked Kiwi Scott McLaughlin’s chances in the 105th Indianapolis 500 at the weekend. He still finished a creditable 20th in the 35-car field and, ironically, was the highest placed rookie ahead of 25th place finisher Pietro Fittipaldi.

Piloting the Pennzoil-backed #3 Team Penske entry, McLaughlin found himself on the fringe of the top 10 throughout the opening half of the 200-lap affair. However, a mistake on entry to the pit lane soon after the midway point resulted in the 27-year-old being handed a drive-through penalty for speeding in the pits.

Forced to go through the pit lane again, McLaughlin dropped to the tail end of the lead lap. Before the penalty, McLaughlin had returned to the race after his service just behind eventual winner Helio Castroneves of Meyer Shank Racing.

A weekend of misfortune for Jordan Love and his SPS Automotive Performance teammates Miklas Born and Yannick Mettler ended without reward as their silver #40 Mercedes-AMG GT3 met with a freak incident during qualifying at the Paul Ricard Circuit.

On Jordan’s flying lap, while following another car along the high-speed Mistral Straight, a piece of debris made heavy contact with the front-end causing significant damage, and limiting visibility.

Despite this, Jordan completed the lap before being forced to end the session early, with the team eventually retiring from the 6-hour race – the second event of the Fanatec GT World Challenge Europe Endurance Cup.

Miklas and Yannick ran in the first two sessions with the Perth racer taking the final stint, looking to secure a top-10 grid slot, after posting the car’s quickest time in first practice.  But with nearly 50 cars on the grid battling for clear air around the 5.791-kilometre circuit, the 15-minute qualifying sessions were always going to present a challenge.

“I am absolutely gutted. It was definitely one of those races where if it could go wrong, it seemed to, unfortunately.

“It was really great to take the opening stint, and I made some good progress over the early laps to move up the order but it was just a case of being in the wrong place at the wrong time when the incident with the Lamborghini unfolded ahead, and I had no way of avoiding it.

“Initially I thought we might have got away with it and the pace seemed ok, but the repairs were needed and the team did a great job to get the car fixed and back out so quickly.

“We were then just unlucky with the puncture, and then the wheel issue which ended the race for us.

“Really disappointing to end the race early and not show our true potential, but hopefully we got dealt all our bad luck for the season in this one race!”  Jordan Love

John O’Dowd and Toni Feaver conquered the precarious conditions and held off their rally rivals in a muddy battle to cross the finish line of the Make Smoking History Forest Rally with an outright win.

After missing out on the top podium place last year by a mere half a second, O’Dowd and Feaver in the Skoda Fabia R5 were determined that history would not repeat.

The duo held off a charging Ben Searcy and Daymon Nicoli in the Mitsubishi Evo 9 and claimed the outright win.

“Toni and I have been in the car together for three years, and we’re working beautifully together. She’s been a fantastic help writing the notes and helping me with them – all I’ve got to do is try and commit to them, which is the hard part.” John O’Dowd.

My thanks to Lauren Cornes for the WA Rally info and to Dugite – J Sierociak for the image.