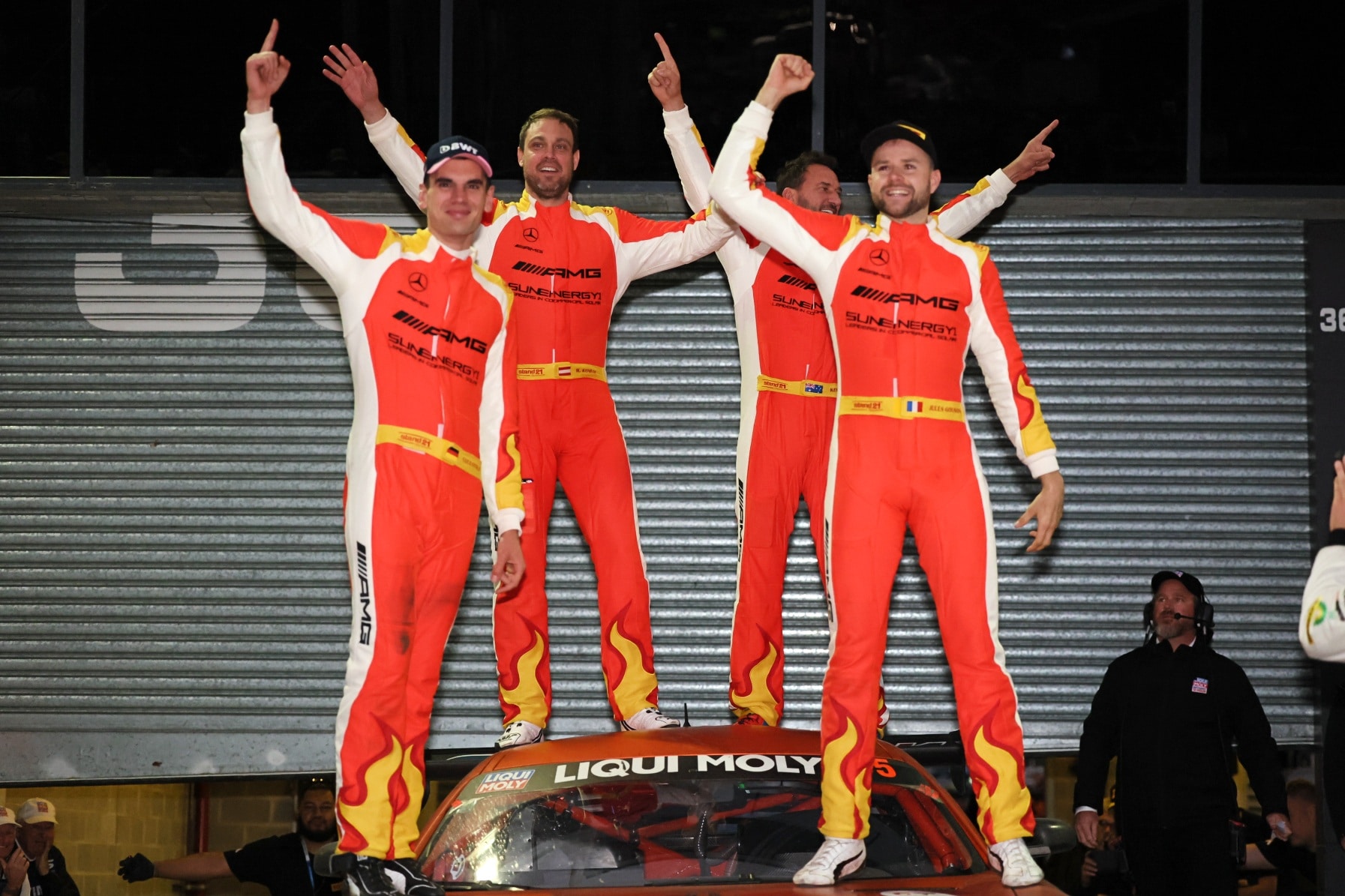 ANY RACE AROUND THE MOUNTSAIN is a highlight of my weekend, and the Liqui Moly Bathurst 12H once again lived up to its promise – as good as it gets across this world-class venue.

The opening round of the 2022 Intercontinental GT Challenge featured a stellar 20-car field, running exclusively on Pirelli tyres.

As a Mercedes fan (my 20-y-o C Kompressor is my pride and joy), it didn’t hurt one little bit that 27-year-old French ace Jules Gounon led his SunEnergy1 Racing to victory, bringing home a podium sweep for the German marque at Mount Panorama – and his second straight win at Mt Panorama.

Mercedes-AMG sealed its first Bathurst 12H win since 2013 – joining Ferrari on two GT3-era wins, with only Audi having more on three.

Gounon was pushed in the final hours by German ace Marco Engel, but #91 Craft-Bamboo Racing’s spirited fightback with teammates Daniel Juncadella and Kevin Tse ultimately fell just short, finishing second. Not too shabby at all, considering they missed practice!

And, despite a formidable third, just 30 seconds off the winner, Kiwi wunderkind Shane van Gisbergen admits his #888 entry was “never really in the hunt” in Sunday’s 12H, where wild changing weather conditions created challenging conditions from go to whoa for him and teammates Broc Feeney and Prince Jefri Ibrahim.

Barcelona is the best-known circuit on the Formula One calendar for drivers, as the majority settle back into the familiar territory of back home in Europe for this weekend’s Spanish Grand Prix.

And that is a true indicator of where a car’s performance is at after five races so far, with three wins to Max Verstappen and two to Charles Leclerc.

It’s here at the Circuit de Barcelona-Catalunya – where F1 has resided since 1991 – that teams tend to bring their first serious upgrades for the season, so anything could happen!

That the 4.655km circuit is recognised as the track for pre-season testing is testament to its 16 corners, mixing both high speed and delicate technical areas.

And being as accustomed to the demands of a circuit so very well-known, here as recently as February, makes the tyre choice pretty straightforward for the long turn 3, as well as Turn 9, all famous corners that put a lot of energy through the tyres.

So Pirelli brings its hardest tyres in the 2022 range in Spain to the race where it is title sponsor, with the C1 as the P Zero White hard, the C2 Yellow medium, and C3 Red soft. Just the same as last year, albeit using a brand-new family of tyres.

1. The teams concentrated on testing compounds in the middle of the range back then rather than the hard; 2. Weather conditions were much cooler; and 3. The new cars were in their most basic launch specification.

The cars have moved on considerably since, and it’ll be interesting to see how much that improvement actually is with the latest upgrades.

•             With Barcelona being a mega-used circuit, and a busy schedule of support races this weekend, there not a huge amount of track evolution expected over the course of the three days. Temperatures should be dry and warm, adding to the heavy demands placed on the tyres.

•             Last year’s winning strategy was a two-stopper, the traditional approach to Barcelona, with Mercedes driver Lewis Hamilton triumphing from pole using a soft-medium-medium strategy. Soft-medium-soft was used by all the finishers from P2 to P8.

Spain Has a Bit of Everything

“It’s hard to say much about Barcelona that hasn’t been said already, as it’s possibly the best-known circuit on the calendar for the drivers, with its wide-ranging layout making it a perfect testing venue.

“It has a bit of everything, with the very technical final sector being particularly important when it comes to looking after the tyres.

“As a result, the teams will have a good opportunity to assess the progress they have made with their cars since the start of the season, although the weather conditions will be much warmer and there will probably be a lot more running on the hard tyre than there was in testing, which will perhaps be the key to the race.

“In the past, Barcelona has traditionally been a two-stopper, so it will be interesting to see if the new generation of tyres this year leads anyone to target a one-stopper.”

Daniel Ricciardo competes in his 216th F1 race in Barcelona, surpassing the record held by Mark Webber for the most grand prix starts by an Australian Driver!

•             Round four of the Formula 2 season in Spain will use the P Zero White hard and P Zero Red soft tyres. Each driver has five sets of slick tyres (three hard and two soft) to use across the weekend, which includes a 26-lap sprint race on Saturday afternoon and a 37-lap feature race on Sunday morning, when both compounds must be used if it’s dry.

•             Round three of the Formula 3 season will use The P Zero White hard tyre, with drivers having three sets of the hard compound plus one set of P Zero Yellow medium tyres carried over from the previous round at Imola for use in free practice only. The 20-lap sprint race takes place Saturday with the feature race, over 24 laps, Sunday.

What did you think of Miami?

Last weekend’s inaugural Formula One Miami Grand Prix was indeed a great spectacle, where the City burghers spent squillions – and much of 2021 – building its 5.41km track and “touting the over-the-top viewing experiences at every turn”, according to the New York Times.

There was a beach club in the middle of the track with imported sand and swimming pools. And mermaids. So what if the trackside sandy beach marina had no water, it had 20 impressive yachts.

Gondolas, branded by Heineken, hovered high above the track to give viewers a bird’s-eye view of the race. Casa Tua, one of Miami’s top restaurants, set up a nightclub at Turn 1.

There were celebrities galore (including Michael Jordan, David Beckham and Daniel Ricciardo’s mate Tom Brady. And Miami charged like a wounded bull — even the cheapest grandstand seats more than $1000, while VIP tickets reached $45,000, each!

And F1’s top of the range Paddock Club, the epitome of style and exclusivity the world over, copped a bollocking for not being up to its normal standard!

Motorsport Australia this week suspended issuing permits for any Targa style tarmac rally event, following the tragic death of a competitor during the 2022 TARGA Tasmania. A Review Panel – chaired by Garry Connelly AM – will investigate the latest incident and make further recommendations on the future of similar events. MA will continue to permit tour events, subject to a targeted risk assessment. Any tour event must follow all road rules and signs that apply on a route, even if the road is closed for the event.

Rally Portugal, round four of the World Rally Championship, takes place in Porto during the same weekend as the Spanish Grand Prix, around 1150 kilometres away. This is the first gravel round of the championship, with Pirelli bringing the latest evolutions of its Scorpion gravel tyres.