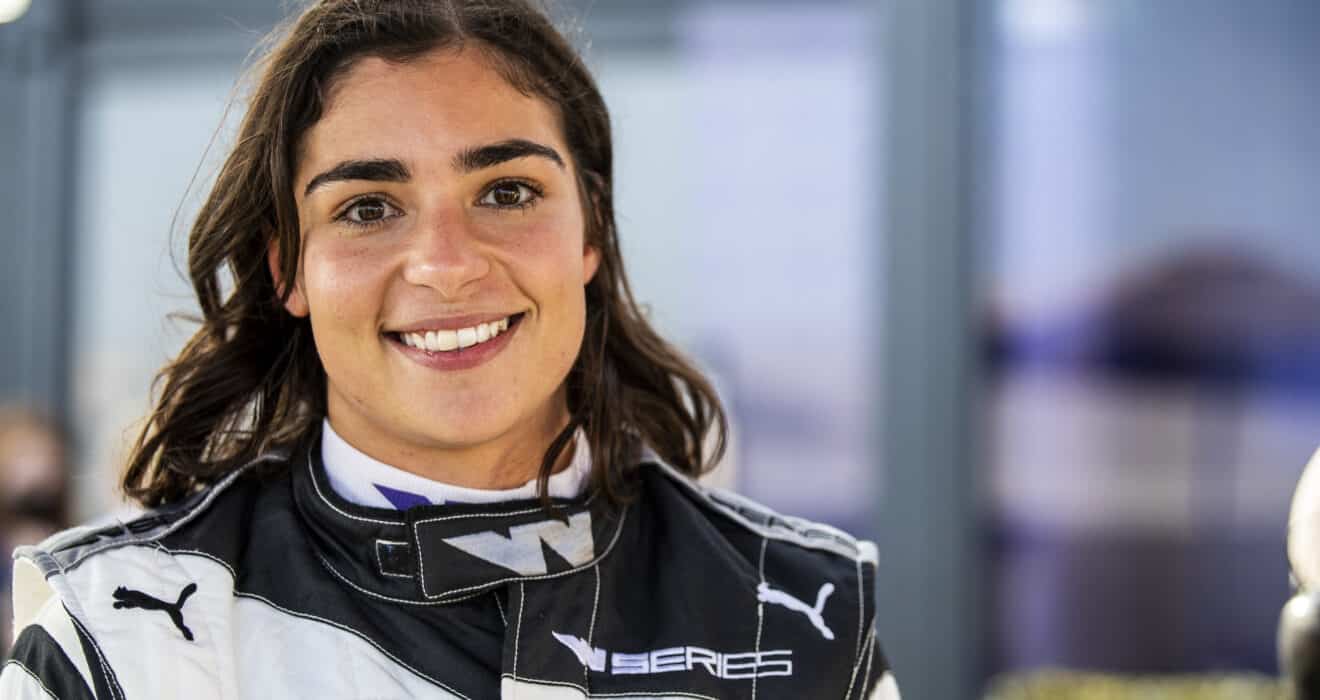 So Changes are Essential

WITHOUT DOUBT British racer Jamie Chadwick is among the world’s elite. At 24 the reigning W Series champion continues to lead the way at the pinnacle of her chosen sport.

Now, with her sights set firmly on a seat in F1 – which no woman has been able to do since Italian Lella Lombardi 46 years ago – Jamie Chadwick bravely poses a serious question:

Can women cope with the present day physical demands of the epitome of motor racing?

Is Formula One Ready for Jamie?

Speaking to The Guardian this week, Jamie Chadwick said if Formula One wants women drivers but it is ‘physically too hard’, then the sport must try to understand why and consider changes.

There is no question she is the dominant force of the all-female racing series, established in 2019 to serve as a springboard to F1. So the FIA and F1 had best start listening really closely, because Jamie knows what she’s talking about, continues to identify potential problems. And is regularly coming up with viable solutions, as she continues on her mission.

This is one very impressive young person

Currently Jamie is targeting her sixth successive victory this weekend on F1’s undercard at the British F1 Grand Prix at Silverstone as she chases a hat-trick of titles.

The reality is it’s been 46 years since Maria Grazia “Lella” Lombardi (26 March 1941 – 3 March 1992) was a racing driver from Italy. Born in Frugarolo, Piedmont, she participated in 17 Formula One World Championship Grands Prix, debuting on 20 July 1974 and finishing her career with half a point. She is the only female Formula One driver in history to have a top six finish in a World Championship race, which she did at the 1975 Spanish Grand Prix[1]

And it’s every bit of eight years since Scot Susie Wolff  – married to Mercedes team principal Toto Wolff  – competed in a grand prix practice session. But, and let’s not forget this, Susie (pictured right) was a test driver for the Williams F1 team!

In her remarkable interview this week, on the eve of the British Grand Prix at Silverstone, the very place where F1 began all those years ago, Jamie Chadwick laid it all on the line – as honest as the day was long.

“I have set myself a goal of competing in Formula One but I don’t know what is actually possible.

“To get into Formula One you have to go through the feeder series – Formula Three and Formula Two – and it is extremely physical.

“Formula One is extremely physical, and we don’t know exactly what women are capable of in the sport.

“If you are aged 15 or 16, and go into car racing, without power steering and driving big heavy cars, a lot of women do struggle, even though they have been successful in go-karting.

“We like to think that women can make it – and I am happy to be the guinea pig and will do my best to push and explore the options to Formula One – but we don’t know.

“There hasn’t been a woman in the recent era that has done it. I am trying to understand whether that is to do with the physical side of it.”

“If it is physically possible, and women can compete against men, how do we make that happen? However, if it is physically too hard, but the sport wants women to compete, then we have got to bring it back and understand why.”

Already a development driver for Williams, Jamie believes a number of technical changes need to be made to aid women racers.

“I don’t think it is just as straightforward as getting stronger in the gym and jumping in the car. Although our sport is incredibly advanced with a lot of things, the physical human performance side is misunderstood.

“In F2 and F3, the steering wheels are all identical and they have a thick grip. How can we make them thinner because women’s hands are not necessarily that big?

How can we make sure there are no restrictions on how close the pedals are so you can get the right leverage?

“And some of the newer tubs in the cockpit are really narrow. Women with bigger hips can’t fit into them comfortably. A lot of these things have been overlooked for obvious reasons but now we need to see whether that does make a difference to performance.

“I would like to think in the next three to four years we will see a female driver in F1. There is a lot of talent that is younger than me coming through that could have great success, but there are details within the sport that have been a limiting factor previously.

“Trying to understand those and changing them – even if that is not for me but for the next generation coming through – is going to be important.”

Meanwhile, McLaren team boss Andreas Seidl has apologised to his drivers Daniel Ricciardo and Lando Norris after a disappointing display last up in Canada.

“We didn’t give Lando or Daniel the package they deserved, so we have to offer them an apology. We also have to use this as an opportunity to learn and come back stronger here for our home race at Silverstone.”

Now that’s a much more sensible response than bollocking the drivers!

Along with Suzuka in Japan and Spa in Belgium, Silverstone places the highest energy demands on tyres all year, which is why Pirelli has gone for the hardest tyres in the range – C1 as the P Zero White hard, the C2 Yellow medium, and C3 Red soft. It’s the third time this combination has been nominated in ’22.

Ultra-rapid and high-energy corners such as the Maggotts and Becketts complex aren’t the only challenge that Silverstone has to offer. It is, after all, the UK and the weather can be extremely variable, despite the fact it’s Summer.

In fact, Silverstone this weekend is almost a mirror image of Perth’s Winter!

Except, there’s some precipitation expected at Silverstone.

The British Grand Prix is high on the list of Team favourites, no surprise given that seven out of the 10 are based in the UK!

For many of the hard working crews, it a rare time for a quick family catch-up.

Last year’s race was won with two tyre changes: one of them taking place under an early red flag period following the collision between Lewis Hamilton and Max Verstappen. Nearly all the drivers completed two stints on the medium plus a final one on the hard.

This year, the compounds and structures are completely different, and there’s no sprint qualifying either – which was a factor in the strategy last year.

“The British Grand Prix was where the new show car for the 2022 season was displayed last year, to highlight the future direction of the sport that we have embarked on from this season.

“The latest aerodynamic regulations are designed to allow drivers to follow each other more closely for longer to give more chance of overtaking, as we saw in Canada, while the tyres are designed to provide less overheating, more stability, and increased drivability within a wider working window.

“All these aspects will be tested this weekend, on one of the most challenging tracks for tyres of the year.”

Pirelli has opted for the P Zero White hard and Red soft tyres for F2 – a change from one year ago, when the hard and medium were used. The extra step between the compounds provides additional one-lap performance and more strategic variability in the races. Each driver has five sets of slicks (three hard and two soft) to use across the weekend. The 21-lap sprint race is set for Saturday, followed by Sunday’s 29-lap feature race. Jack Doohan is the best-placed Aussie on 9th, with Kiwi Liam Lawson 10th, and Perth’s Calan Williams 19th.

The P Zero White hard tyre is nominated for F3 as the single compound: the third appearance in four rounds so far this season for the hardest compound in the range, after Bahrain and Barcelona. The nomination is the same as F3’s previous visits to Silverstone in 2019 and 2020, meeting the need to handle the circuit’s high-energy demands over a full race without pitstops. The 18-lap sprint race is on Saturday, with the 22-lap feature Sunday.

Perth’s Aaron Love competes in the Porsche Mobil 1 Supercup Sunday – immediately before the British F1 GP! “I’m really excited for this weekend at Silverstone, I think there will be a lot to learn as it’s quite a different format than normal with only one practice, qualifying and one race,” the young gun said today.

The Safari Rally in Kenya, with Pirelli supplying its latest Scorpion gravel tyres for the longest WRC event of the year, was won by Toyota driver Kalle Rovanpera, from Finland.

The Spa test days, consisting of two preparation days for the Spa 24 Hours at the end of July – the most prominent event of Pirelli’s GT season – took place from June 21-22. Team WRT Audi was fastest, closely followed by the Dinamic Motorsport Porsche.

The Pirelli Hot Laps programme resumes at Silverstone: which involves some of the world’s leading car manufacturers involved in F1 – who also use Pirelli tyres on the road – showcasing their latest models, with racing drivers treating guests to high-speed laps