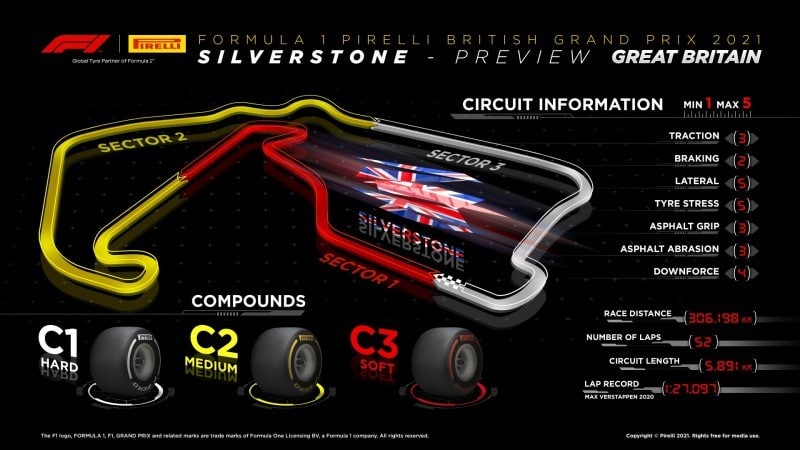 WHILE SUPERSTAR LANDO bemoans the loss of his $80K Richard Mille watch, nicked by a “bunch of yobs” earlier this week outside Wembley, teammate Daniel reckons he’ll follow the young Brit, Max and Charles down the sim path to see if that adds to his style.

The Aussie has nothing to lose by trying the popular simulator racing, as he desperately needs something going his way despite his promising change of fortune last time out.

He’s been struggling in the McLaren with his entry to the corners, but Mark Webber reckons he’ll get it sorted.

“There’s too much class for that to go on for too long. He’ll get on top of it,” Webber told Nine Wide Worlds of Sports today.

The diminutive Norris, proud of his British-Belgian heritage, is the blowout star of the F1 season with his remarkable three podium performance so far, now in pride-of-place fourth after Austria, and a clear 61 points clear of Daniel!

What a Difference a Year Makes!

Crowds are Back in Britain!

The caravan has set up around the familiar surrounds of the 5.891km Silverstone in Northhamptonshire for this week’s British F1 Grand Prix. It can cater for a daily capacity of 140,000 plus fans and authorities have given the green light for that number to attend.

How Can This Happen?

And totally off-topic, how come 400 NRL team members can bubble-up in Queensland to dodge the Covid threat, while a bunch of Olympic athletes are denied entry to train with their mates in Cairns? That sucks and is something the National Cabinet could resolve in a flick of the wrist – although it’s probably too late now, with the Games just days away in Japan!

Mario Isola, Pirelli’s gun F1 boss, has been under the hammer recently and the successful debut of F1 sprint qualifying relies heavily on the Italian prime product, the event’s title sponsor.

The tyres nominated are the same as last year’s Brit GP – the first race of a Silverstone double-header in 2020 – C1 as the P Zero White hard, the C2 Yellow medium, and C3 Red soft. These are the hardest compounds in the P Zero F1 range, essential to combat the famous demands of the circuit which puts lots of energy through the tyres.

“There are plenty of new things to look forward to during the Silverstone weekend: first and foremost the introduction of sprint qualifying for the first of three races this year, which will completely alter the dynamic and rhythm of the weekend as well as having an important effect on how the tyres are used.

“The different ways in which the teams interpret these new regulations and make the most of them is going to be fascinating to watch.

“We’re also introducing the new construction of rear tyre that was tested successfully in Austria with positive feedback.

“As for Silverstone itself, it remains one of the biggest test of the year for tyres thanks to all its fast corners, meaning that some degree of tyre management is always essential.

“Another key factor is of course the British weather, which is famously variable at this time of year.” Mario Isola, Pirelli’s head of F1 and Car Racing.

Free Choice of Tyres for Saturday

Mario tells us the allocations are different for those weekends hosting a sprint qualifying: 12 sets of slicks (instead of 13) -:  two sets of P Zero White hard, four Yellow medium, and six Red soft.

•             In Friday qualifying, only the soft tyre can be used but there’s no obligation to start the grand prix on the tyre with which the fastest time was set in Q2. In Saturday’s sprint qualifying, drivers have a free choice of tyres with no obligatory pit stop. The tyre rules for the grand prix on Sunday remain unaltered, apart from every driver having a free choice of tyres for the start.

•             The new rear construction, tested during free practice in Austria, makes its race debut in Silverstone. These rears have a more robust structure but no extra weight, and incorporate some of the elements already planned for next year’s 18-inch boots. They’ll be used from now until the end of the season.

•             Silverstone is renowned as a high-speed, high-energy circuit. The famous corners Becketts and the unfortunately named Maggots in particular impose big forces on the tyres, caused by lateral acceleration peak in excess of 5g as the drivers sweep through the complex without lifting.

Aussie Oscar Piastri (@OscarPiastri) sits second, heading into Silverstone this weekend and the fourth round of the FIA F2 championship.

Like all F2 drivers, Oscar is using the P Zero White hard and Yellow medium tyres, the first time the hardest combination in the range is nominated in 2021.

•             Rally Estonia is also on this weekend, on fast and smooth gravel, a marked contrast to the rough and broken roads of the returning Safari Rally last month. The legendary Frenchman, the ultra-cool Sebastien Ogier, has a handsome lead after six rounds of the ’21 WRC.

•             The epic Pikes Peak hillclimb in Colorado was won by Brit Robin Shute in a Wolf prototype using Pirelli’s P Zero hillclimb tyres: designed to provide instant grip even in cool temperatures. Check it out here: