The Ring’s F1 Forecast is Dire! 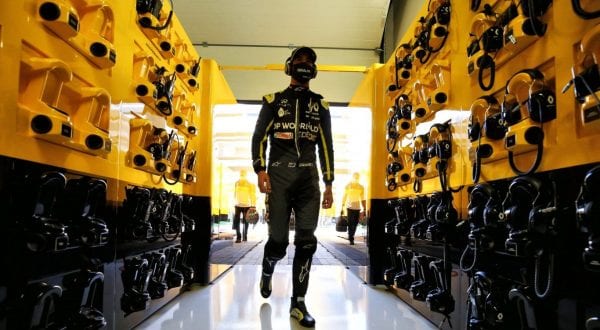 IT’S SEVEN YEARS since Formula One last raced at the legendary Nürburgring and that was in Summer – it’s worth remembering that the recent 24 Hours event was neutralised for more than nine hours as a result of torrential rain! As the F1 circus gathers this week at the German venue for the Eifel Grand Prix the forecast is a little better, but it’s likely to be wet and slippery.

Renault’s Daniel Ricciardo reckons the weather could turn the event into a “crazy race”.

“I last drove the Nürburgring in 2013 so it’s been a while, but I am looking forward to racing the circuit again. In terms of the track, the last chicane is quite fun as you approach it quite fast and jump over the kerbs, making the exit of the corner quite wild.

“In today’s Formula 1 cars it will be very quick, so it should be fun, and we go there looking to build on the positive run we’re on.”

“The weather report looks quite cold and wet, so it’ll be very different to our last few races where it’s been warm.

“It’ll be interesting to see how the car behaves in these conditions.

“Overall, given the time of year it could be quite an unpredictable weekend so we could be in for a crazy race.

Rather than The Ring’s frightening 20km Nordschleife (North Loop) circuit, motorsport’s elite class will perform around the 5.148 kilometre Grand Prix circuit of the Nürburgring, with up to 20,000 spectators permitted.

“I’ve been there in May and you open the curtains and see snow! I’ve had a race cancelled there in the past.

“Anything can happen though. It could be a beautiful autumnal weekend and the sun could shine every day we go there.

“But be prepared for everything and take your winter jacket because I think that you’re going to need it.”

No Formula One or Formula Two

But the prime struggle is in getting the tyres to work properly.  This is the first race weekend in 2020 without F2 or F3. Fewer support races mean less rubber is laid on the track which, according to Pirelli, will have a marked effect on overall track evolution.

“It’s been so long since the last race there that the Nürburgring can almost be considered as a new venue, with the latest generation of hybrid turbo F1 cars never having driven there,” says Mario Isola, one man who knows as much about tyres as anyone on the planet!

“Nonetheless, teams and drivers probably have some idea of what to expect from the past (or from their experiences in other championships) – although the 2013 Nürburgring race was held in July. Consequently, the whole process of data collection during free practice on Friday will start from scratch, on a blank sheet of paper.”

Andreas Seidl says that the temperatures will not be much worse than is experienced at winter testing, when teams do not normally have too much trouble.

“It is difficult to predict. In the end I think it depends a lot on the tyre choice, or how the tyres work – especially if the track temperatures are cold. But it’s the same challenge for all.

“But we do testing in winter in Barcelona, where the track temperatures are also below 10 degrees in the morning, and the cars are also performing because the grip is there with the tyres.

“Racing at the Nürburgring for the first time in F1 since 2013 is exciting for the sport. It’s a circuit I’ve done a lot of races at in varying conditions in my racing life. Due to the time of year, the weather could be an interesting challenge that we’ll have to factor in over the weekend.”

With Nürburgring’s wide range of corners and no recent information about F1 cars here at this time of year, Pirelli has opted to bring tyres that cover the middle ground, to deal with a wide variety of circumstances: C2 as the P Zero White hard, C3 as the P Zero Yellow medium, and C4 as the P Zero Red soft.

Pirelli’s previous experience has shown that the Nürburgring isn’t particularly demanding on tyres: another reason for the tyre usage to be biased towards the soft end of the scale.

The frequent rain in the Eifel region also means that the track surface is often ‘green’ and slippery, as any rubber that gets laid down is often washed away.

•             There are some quite aggressive kerbs on the chicanes (particularly at the NGK one) that encourage the drivers to take a clean line.

•             The hairpin Turn 7 is particularly tricky: there is a big deceleration heading into it and the front-left tyre has to do a lot of work to compensate for the unusual camber of the corner.

•             Cold weather below 10 degrees centigrade ambient can potentially cause ‘cold cracks’ in the tyres, which means that they need to be carefully looked after while being fitted in the fitting area and then stored by the teams.

“The Nürburgring is practically an all-new venue for us, so we’ll be treating it as if we are coming there for the first time in Formula 1, although of course we remember it well and we have raced there many times in other championships.”

“In order to ensure we have everything covered, we’re bringing the three tyres in the middle of our range, which are also well-suited to the varied demands of this track.

“Probably the biggest factor will be the weather, with low temperatures and rain quite likely at this time of year.

“As a result, the teams might have to deal with some quite unusual circumstances, on a track that they aren’t particularly familiar with.

“So this is a race that is likely to favour drivers and teams who are able to get to grips with new situations quickly.

“I think it’s fair to say that we’re set for a race with many variables, where we may even see all five types of tyre that we bring to the grand prix used over the course of the weekend.”

The Italian firm is using this rally to showcase the new range of tyres that it will supply to the WRC from next year.