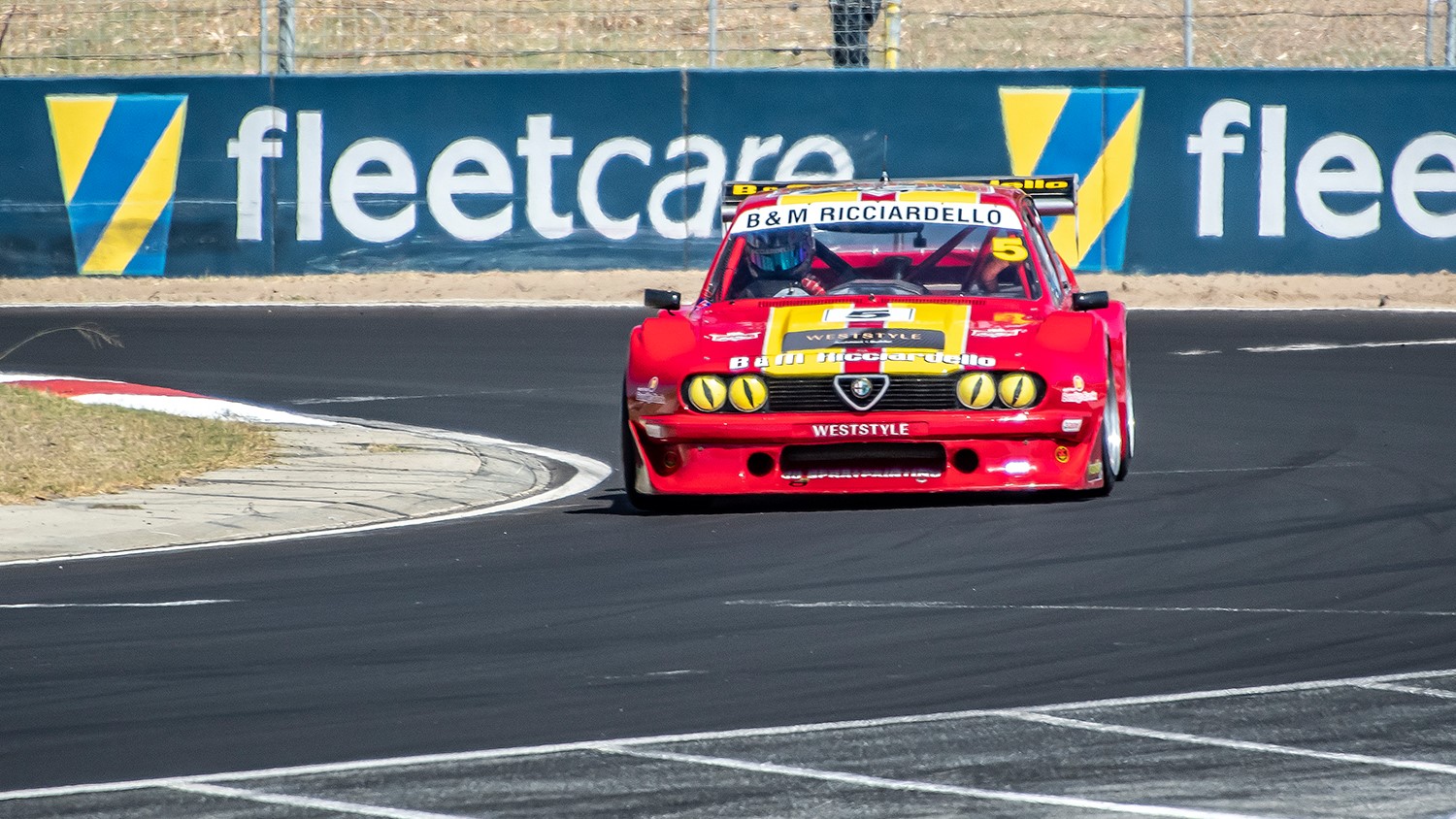 I’VE WITNESSED some wondrous racing over the years but none more impressive than Tony Ricciardello’s roaring Alfa Romeo-Alfetta in full flight at Barbagallo Raceway in the WA NightMasters, way back when!

In fact, that was in 1999, and the sight and sound of the red rocket charging through the field – starting from the rear of a reverse grid – was something to behold. The skill with which the young man fought his way to be leading the field after the first turn was extraordinary.

While Tony and his Alfa Romeo Alfetta GTV won’t be on track at Wanneroo Raceway this weekend, but the bi-annual action-packed NightMasters racing series will!

Saturday’s card for the WA Sporting Car Club is jam-packed with 22 races scheduled, starting with qualifying around midday and continuing until late evening. The weather doesn’t get much than Saturday’s forecast for a great day’s racing. And it’s a great family day out!

Re the red Alfa-Chev, we mustn’t forget the years Brian Smith piloted the red rocket against the country’s best sport sedans of the era. I once had the privilege of sitting on the hot floor of that car for a lap!

A Trip Down Memory Lane

Here’s an excerpt from my weekly column in The West Australian back in September, 2014, during the raceway’s 50th anniversary.

“ONE of the most recognisable racing cars around the country is Tony Ricciardello’s bright red rocket Alfa Romeo Alfetta GTV, capable of a scary 325km/h.

“It was quite a spectacle in my early days at Barbagallo Raceway to watch Ricciardello, pushed to the back of a reverse grid race in the popular NightMasters, weave his way through the tightly-packed field with fierce speed and extraordinary dexterity.

“The knowledge that the growling #5 B&M Ricciardello Chevy V8-powered Alfa was racing certainly dragged the fans through the gates and it was quite a buzz to see the youngster – a champion even then – at work in the cockpit.    Could he power his demonic space frame constructed beast to the front before Turn 1?

“Invariably he achieved that feat, and it never took him more than a lap to take back control of the three-race event, run at the start and the finish of each WA season.”

And it’s no wonder Perth’s Tony Ricciardello finished his stellar career as one of Australia’s premier race drivers, with a world record to add to an impressive resume. Image courtesy motorsport.com

Tony Ricciardello received his Guinness world record certificate for most Sports Sedans titles after scoring his eighth in 2014.

“I’VE OFTEN SAID the WASCC’s NightMasters has all the ingredients to be a truly great event, one which I don’t believe has ever reached its true potential. I reckon a small group of dedicated competitors, with a club facilitator, over coming months could come up with a winning formula for 2022 – and beyond. And help bring back the fans that once flocked to the Wanneroo venue, still WA’s premier motorsport location.” Adrian Chambers.

When Daniel Ricciardo and Valtteri Bottas came together in last weekend’s Mexico City Grand Prix, it wrecked both their chances of a decent finish. But, after seeing the replay, Daniel is convinced it was as FIA stewards ruled – a racing incident.

While not everyone agreed with the Aussie, who eventually finished in 12th and out of those crucial points, it was indeed chaos at the first turn after the run down the 1.3km straight.

But at least he apologised to the classy Finn.

“I went to the inside of (Red Bull’s Sergio Sergio) Perez and I do remember locking at one point.

“Replaying it in my head over the next 70 laps, I thought I locked and went up into Valtteri. So I was kind of obviously kicking myself.

“But then looking at the replay, it looked like I locked in the straight-line phase and then actually recovered before turning in.

“And it looked like there was just not enough room.

“Obviously Valtteri came across, probably expecting to have a bit of clear track, and then there was Perez and me.

“So I don’t really blame Valtteri.”

“I’m the one that hit him. But honestly, looking at the replay, I just think it’s a first lap incident and a matter of maybe me being optimistic.

“I feel that it’s one of those gaps: if you don’t go for it, someone else will and then you’re going to get the short end of the straw.

“I’m disappointed. And I’m still going to be hard on myself and I never want to ruin my race on lap one.

“But let’s say, if it’s possible to feel any better, I feel slightly better after seeing the replay. And it was actually quite a small hit. But we know these cars don’t take much to damage.”

Why Pirelli Chose the Tyres

In 2019, when the last Brazilian GP was held, Red Bull’s Max Verstappen won with a three-stop strategy, following two safety cars at the end of the race.

•             The Brazilian Grand Prix will use the C2 compound as the P Zero White hard, C3 as the P Yellow medium, and C4 as the Red soft – the same choice as all the races on the American continent this year.

•             With the hard tyre not being used extensively in 2019, this year’s choice should allow a more even use of all the compounds and potentially wider variations in strategy.

•             Brazil is the final race this year run to a sprint qualifying format, leading to a different tyre allocation than normal.

Rather than 13 sets of tyres for a weekend, there are just 12 sets – two sets of White hard, four sets of Yellow medium, and six sets of Red soft.

The short and intense Interlagos lap is one of the relatively few anti-clockwise layouts on the calendar, with a non-stop succession of corners that keeps the tyres working hard: particularly the front-right.

According to Pirelli guru Mario Isola the short lap means traffic can be an issue and there’s also a high safety car probability, so any sprint qualifying or race strategy needs to bear that in mind.

•             Apart from the long uphill Arquibancada left-hander, all of the 15 corners are reasonably short, meaning that the lateral loads on the tyres are contained and the energy demands quite low: it’s more about traction and braking.

•             The weather in Brazil at this time of year can range from intense heat to torrential rain, with some grooves having been cut in the asphalt to help drainage in the event of heavy rain.

“This year we return to a nomination more similar to the choice made up until 2018, using the C4 as the soft option.

“In 2019 we decided to go a step harder, trying to prevent graining and degradation on the soft, but as a result the hard tyre was not used much.

“Interlagos is an old-school track that keeps drivers and tyres busy and often produces some dramatic races, as we saw last time.

“The weather is another variable factor: we’ve experienced some of the hottest track temperatures of the season in the past, and also the complete opposite.

“As a result, this year’s more versatile tyre selection should be able to cope with all the wide-ranging demands of the Brazilian Grand Prix and provide some different strategies.

“Although the race takes place at around the same time of year as it did last time, the teams have not experienced sprint qualifying at Interlagos before, so there will be plenty to discover.”