Kiwi and a Frenchman a-la-table 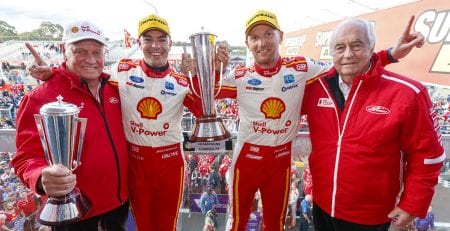 What was on the menu?

Their DJR Team Penske was sentenced at Saturday’s CAMS hearing after being found guilty of breaching the FIA International Sporting Code by asking Fabian Coulthard to deliberately slow his Car #12 during Australia’s Great Race last weekend.

“After reviewing data from Car #12 following the Bathurst 1000 with the Stewards and Deputy Race Director, DJR Team Penske accepts the penalties issued related to the FIA International Sporting Code.”

It all went down during a crucial Safety Car on Lap 135 (of 161) around the iconic 6.213km circuit that is Mount Panorama, Bathurst.

The Team accepted the penalties:

The decision has not affected the race win of McLaughlin and Premat although it must, at times, have been considered a hollow victory.

Still, it’s their names forever more on the coveted trophy, regardless.

CAMS CEO Eugene Arocca has confirmed the fine will be used for research and development of safety mechanisms for the sport.

“I would also like to acknowledge DJR Team Penske’s co-operation with all requests from our stewards throughout this process,” he said.

After the Horse has Bolted!

FOR MINE, the simple fact remains that everyone involved – and the international reputation of the event – may have been better served had the matter been resolved on the day, no matter what extra stress that entailed. The sport did not need headlines like this. AC