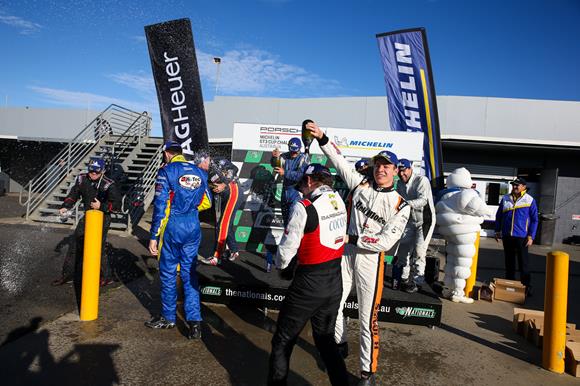 SIXTEEN -YEAR-OLD AARON LOVE scored his maiden win on Saturday in the Porsche Michelin GT3 Cup Challenge in Round 2 at the Phillip Island Grand Prix circuit.

And in Sunday’s winner-take-all finale on the island, Aaron swept all before him in his Sonic Motor Racing Porsche. He won the start and fended off his rivals in a stunning 11-lap sprint to score his second race win of the year – and take the round overall. Harri Jones finished second overall to extend his title lead, while Max Vidau completed the podium.

Aaron and brother Jordan now each sit second in their respective championship standings.

Aaron, Harri Jones and Max Vidau were tied on points after two races and the Perth schoolboy’s victory sets up a three-way tie for round honours in tomorrow’s finale. Starting from pole, Max won a wild race one after a battle with Harri and Aaron, with each of the three leading the race during the opening lap. Aaron finished third in the eight-lap sprint.

If that was the entrée then the main course delivered even more as another Jim Richards Endurance Trophy classic added a new winner to the list this year.

Aaron starred in the 26-lap race this afternoon in another pitched battle with Harri and Max that saw intense battling from start to finish. It was a thriller! Aaron, who only graduated from open-wheel racing this year, did everything right – particularly in the closing laps – to record a stunning victory and become the fourth different winner in the eight races contested so far this season.

“It can’t get much better than that. I was nice and consistent and tried to let the race come to us at the start. We were on the back of Harri and it was a long -fought battle from there. I ended up getting past him at turn two and I was really proud of that. I tried really hard for that. After that it was keeping my eyes forward – being calm with no mistakes.”

The final race of Round 3 starts at 7:10am WST and is streamed live via the GT3 Cup Challenge website and www.thenationals.com.au

My thanks to Richard Craill, Porsche Motorsport Media/PR