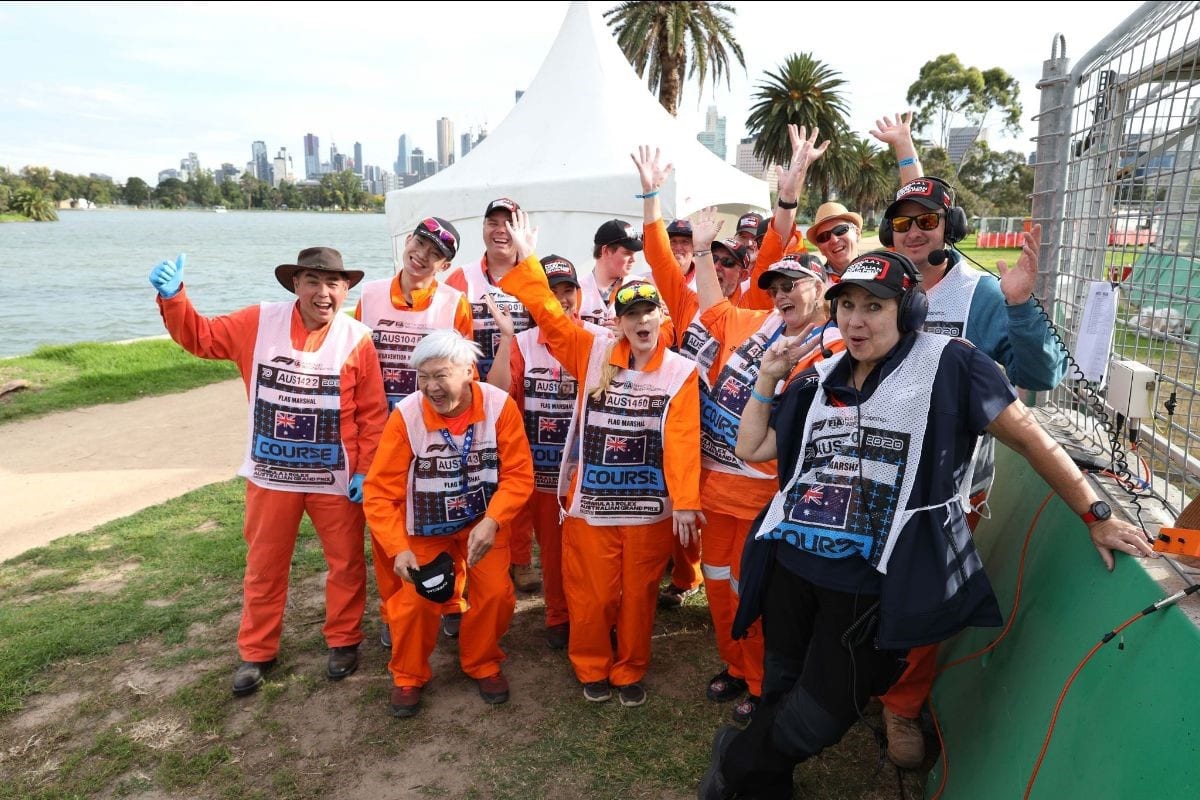 Motorsport Australia’s world-class officials have again been acknowledged at a global level, with the Formula 1 Australian Grand Prix 2020 Officials named the FIA’s Best Team of Officials of the Season. Each year the international motorsport body acknowledges a small number of the best volunteer officials from around the world, with the Grand Prix team recognised for their efforts in what was a very unique event.

While the 2020 event was cancelled on the Friday morning, more than 900 officials arrived at the track early, ready to work despite some uncertainty and continued to remain at their stations around the track until the difficult decision had been formally announced.

“The efforts of the Formula 1 Australian Grand Prix 2020 Officials Team was a true show of commitment and dedication in what was a really challenging and unique situation for so many people,” Fraser said.

“It would have been very easy for this group to have simply not turned up for duty in what was a rapidly changing environment, but to their credit the officials turned up in numbers and were ready to go had the track action been able to get underway.

“Of course, we are eternally grateful to all 11,000 officials who make the sport so great and I think I can speak on behalf of all competitors and event organisers in saying how proud and thankful the motorsport community is for their ongoing efforts.”

“Our Officials Continually Inspire Us”

“Having been in the muster tent with the officials team on the Friday, it was truly inspiring to see the positive attitude of the officials who were ready to go despite the uncertainty,” Arocca said.

“Even when the cancellation was announced, all the officials returned to the muster tent with a positive attitude and were very understanding of why the decision had been made and were prepared to assist however they could.

“Our officials continually inspire us and we know that without them, motorsport, including the Formula 1 Australian Grand Prix, would simply not be able to go ahead year-in, year-out.”

Recognised as World Leaders in the Sport

Australian Grand Prix Corporation General Manager for Motorsport, Entertainment and Industry, Craig Fletcher, said the volunteers are the backbone of Melbourne’s Formula 1 event and this award highlights the extraordinary effort of the events volunteer team.

“Our incredibly talented volunteers play a vital role in helping us to deliver a world-class Formula 1 event year after year,” Fletcher said.

“The Formula 1 Australian Grand Prix volunteers are recognised as world leaders in the sport and this award is a wonderful and appropriate acknowledgement of their talents, resilience and tireless dedication.”

Crew Did Their Job with Complete Focus

George Chrobak, one of the event’s chief marshals, paid tribute to every official that was part of the team.

“I am extremely proud of the efforts of everyone involved with this year’s Australian Grand Prix,” Chrobak said.

“For our terrific team to be recognised by the FIA is truly an honour and every official that weekend should take great satisfaction of what we achieved under the circumstances – especially all of those who put in additional time and effort in the lead up to the event.

“Although there was so much uncertainty at this year’s event, our crew continued to show enthusiasm and a desire to do their job with complete focus – a pure example of how this team of people acts year after year.

“What we saw in 2020 was nearly 1000 passionate members of the same team rise to the occasion when the going got tough and it’s that pride that we use to make every Australian Grand Prix a success.”

The award is timely, with FIA and Motorsport Australia celebrating FIA Volunteers’ Weekend on 28-29 November.

In recent years, Motorsport Australia officials have regularly been acknowledged in the FIA’s annual prizegiving ceremony, the only ASN to consistently receive these prestigious awards.

Applications for officials wishing to be part of the 2021 Formula 1 Australian Grand Prix are now open. More information can be found by clicking here.

2016 Best Doctor of the Season: Dr Brent May

My thanks to Paul Riordan – [email protected]