Australian on a Knife Edge 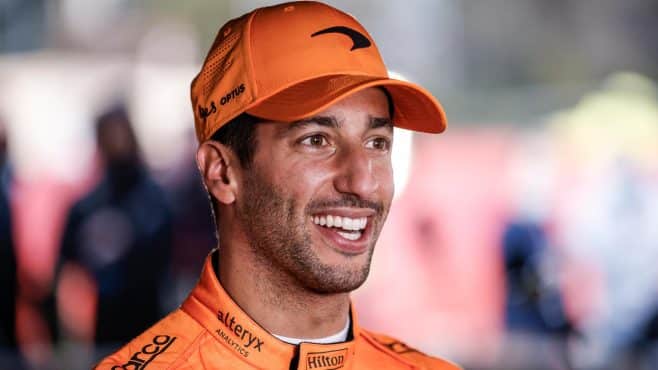 And Michael Masi Back Home to Make Amends

“I’M WORKING MY ASS OFF with the team to make improvements and get the car right and back to the front where it belongs,” said struggling Australian F1 ace Daniel Ricciardo this week. “I still want this more than ever – see you in Le Castellet!”

“There have been a lot of rumours around my future in Formula 1, but I want you to hear it from me,” the eight-time F1 winner said this week.

“I am committed to McLaren until the end of next year and am not walking away from the sport. Appreciate it hasn’t always been easy, but who wants easy!”

Even Australian Mark Webber, desperate to get his young charge Oscar Piastri settled into the premier single-seat category before it’s too late for 2023, has set his sights on McLaren – a move which has angered the Perth superstar’s legion of fans.

There’s no question reigning FIA Formula 2 champion Piastri has the requisite qualifications for a seat in Formula 1 next year – and Webber would much rather he started in a top outfit like McLaren, rather than Williams and Alpine which also are in the mix.

Out to Break Horror Stretch

Ricciardo has now made it abundantly clear he believes his contract is tight, despite recent rumblings from Team CEO Zak Brown, and he wants to stay with McLaren the team for the remainder of his term which currently ends at the end of 2023.

Daniel’s points total of 17 is in dire contrast to teammate Lando Norris on 64!

This Car Needs to be in Top Nick

Undoubtedly McLaren needs to ensure his car is in its best possible shape (and it certainly hasn’t been) for the French Grand Prix at the Circuit Paul Ricard Circuit next week – and beyond in the second half of the 2022 season – to give Daniel Ricciardo every opportunity to adequately demonstrate the skills for which he was renowned.

And, we must not forget, a career which earned him those eight F1 wins – only one unfortunately, since his lofty days at Red Bull.

Otherwise, binding contract or not, it’s not difficult to envision Daniel Ricciardo NOT being with McLaren in 2023!

So, as the 33-year-old said, “See you in Le Castellet!” That’s the site of the French Grand Prix, the weekend after this.

The 44-year-old Masi evidently returned home back in April and – unsurprisingly – has kept a low profile. This is his first public statement since that controversial 2021 Abu Dhabi finale in December.

Interestingly, Masi made no mention in his statement of that remarkable event other than to say the last few months have been “overwhelming”.

Masi earned the ire of many Formula 1 fans last season when he became the headline in the sport’s greatest title fight in decades.

As Lewis Hamilton led Max Verstappen in the vital championship race at Yas Marina, Masi made the controversial call when a late Safety Car came out to allow only the cars between Hamilton and Verstappen to unlap themselves.

With just one lap remaining, the Safety Car entered the pits and Verstappen, with fresher tyres, easily overtook Hamilton to win the race and the World title.

Dismissed from his role in February ahead of the 2022 season – with Niels Wittich and Eduardo Freitas replacing him as joint race directors – he has decided to step away from the organisation, having returned home in April.

FIA Thanks Masi for Commitment

The FIA confirmed on Tuesday that Masi had decided to leave the organisation, relocating to  FIA Australia to be closer to his family and “take on new challenges”.

“He oversaw a three-year period as FIA Formula 1 Race Director and Safety Delegate following the sudden passing of Charlie Whiting in 2019, carrying out the numerous functions he was tasked with in a professional and dedicated manner. The FIA thanks him for his commitment and wishes him the best for the future.”

Reflecting on his time in F1, Masi said this week it had been a pleasure and honour representing the FIA as the Single-Seater Sporting Director and FIA Formula 1 Race Director and Safety Delegate since Charlie’s unexpected and tragic passing in Melbourne 2019.

“Having worked on various projects around the world with the Federation and its Member Clubs for over a decade prior to my appointment, I have now decided to leave the organisation and relocate back to Australia to be closer to my family and friends.

Extends Thanks to Thousands of Volunteers, Officials

“I am proud to have worked in partnership for many years with the various FIA Member Clubs, Formula 1 Group, the Competitors, Promoters and Circuit Operators and my colleagues and team internally at the FIA.

“I will always treasure these lifelong relationships and friendships that I have developed throughout my journey to date.

“In particular, I am eternally grateful to Herbie Blash and the late Charlie Whiting for identifying me as a future successor in 2018, a role that I was looking forward to shadowing and learning from Charlie for many years prior to his shock passing.

“I also pass on my sincere appreciation for the support and guidance during my tenure of the former FIA President Jean Todt, Stefano Domenicali, and my dedicated FIA Single Seater team.

“I extend my appreciation to the tens of thousands of dedicated Volunteers and Officials that allow motorsport to happen each and every day around the World, as the safety of the competitors and officials has always remained my highest priority.

“Thank you to the FIA President, Mohammed Ben Sulayem and his Presidential team for their personal support since their appointment and I wish them the best for the future.

“The personal support of my family, friends, and colleagues globally during this journey and particularly in the last few months can only be described as overwhelming and something that I will forever cherish.”

Masi was thrust into the limelight as he became embroiled in a battle between bitter rivals Mercedes and Red Bull as Hamilton and Verstappen fought for the Drivers Championship.

It all came to a controversial conclusion in Abu Dhabi, with a late crash from Nicholas Latifi bringing out the safety car. With Verstappen pitting in second place, his position behind Hamilton was obstructed by five lapped cars.

While Masi originally stated that those lapped cars would not be allowed to overtake the safety car, he then reversed his decision and announced the safety car would return to the pits ahead of the final lap and after some bartering from Red Bull’s Christian Horner and Jonathan Wheatley.

With no cars between the two title protagonists, Verstappen was right back behind Hamilton, on fresher soft tyres and the Dutchman overtook the Brit in dramatic circumstances to win his first World Championship amid uproar at Mercedes.

A report published ahead of this year’s season-opening Grand Prix in Bahrain in March detailed that Masi came under “immense pressure” from “distracting” radio exchanges from the two teams, before the “human error” of allowing those five cars the ability to unlap themselves, as opposed to more lapped cars behind Verstappen too.

Whatever challenge the undoubtedly talented Michael Masi now faces, it is likely he’ll always be known as the instrument that denied Lewis Hamilton an eighth F1 World Championship in 2021.