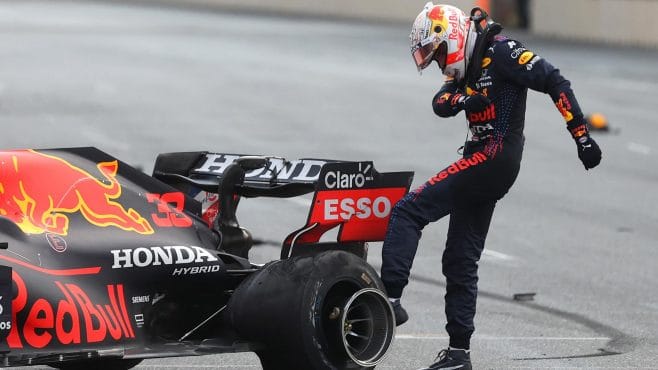 While Max Verstappen heads into Baku, Azerbaijan nine points clear of Charles Leclerc at the top of the F1 drivers’ standings, he’s desperate to make up for a devastating retirement that cost him a maiden Baku victory last year.

The Red Bull driver looked set to take a comfortable victory in 2021 before a tyre issue sent him into the barriers at high speed, with just five laps of the race remaining – team mate Sergio Perez going on to win the Grand Prix – just as he did in Monaco.

Meanwhile Daniel Ricciardo is just as desperate this weekend for a good showing for McLaren to get his career back on track, and stave off the hunting packs!

Over in Fiorano, Italy, Ferrari drivers Carlos Sainz and Charles Leclerc managed a little extra practice testing both the F1 slick and wet-weather Pirellis for next year, after their second and fourth finishes respectively at Monaco.

Until Jeddah came along, Baku was the fastest street circuit of the year and, in my view, it still offers one of the best races of the F1 season.

Pirelli’s F1 Boss Mario Isola reckons It sports a personality all of its own, combining rapid straights with some extremely narrow and technical sections, especially around the famous Turn 9 in the old city centre, which has brought some of the world’s finest to a shuddering halt.

Back in 2016, Valtteri Bottas – driving for Williams at the time – exceeded a reported 378kph on his Pirellis: a record that still stands today.

To comply with the demands of the 6.003km road course, Pirelli has brought the three softest tyres in its range: the C3 P Zero White hard, C4 Yellow medium, and C5 Red soft – the same selection as last year.

The compounds and constructions, of course, are completely new for 2022.

Unlike Monaco, the teams tend to go for a low to medium downforce setup here, balancing the requirement for grip through the tight corners with the need for high top speeds on the fast straights to facilitate overtaking.

The forecast promises to be fairly warm with track temperatures in excess of a heady 50 degrees, although the tight confines of the surrounding buildings mean that there are alternate areas of light and shade, varying the track temps quite a bit around the lap.

Last year, the winning strategy was effectively a one-stopper (although the race was neutralised by a red flag close to the end). On that occasion, the favoured strategy from most of the field was soft to hard, with the soft tyre fitted again for the final three-lap sprint to the flag.

However, the rule of using the fastest Q2 tyre for the race start was in place back then for the top 10, so the strategy may be different this year.

“The demands of this city track are still relatively low, as none of the corners take a huge amount of energy out of the tyres due to the low levels of abrasion and contained lateral loads – which means that we can have the same nomination as Monaco.

“Having said that, the high speeds in Azerbaijan still place a certain demand on the tyres.

“The main point is all about traction, with finding the right balance between front and rear axles being the key challenge for all the teams: you need to have enough heat in the front tyres to generate grip, despite the long straights that cool them down, but not too much heat at the rear, otherwise it’s easy to overheat them in the traction zones.

“Track temperature is also inconsistent in Baku, so all in all it’s quite a specific track with a few different technical challenges, which are nonetheless the same for everyone.”

With Aussies Jack Doohan and Calan Williams still in the hunt for glory, the FIA Formula 2 field of young hopefuls strut their stuff around Baku i

n a 21-lap sprint race on Saturday and a feature race lasting 29 laps on Sunday. Drivers get two sets of the supersoft Pirellis and three sets of the medium to use across the weekend, when both compounds must be used if it’s dry, as forecast.

“I think this weekend was a case of the result not matching our full potential.

“After losing 40 seconds at the first pit stop, we dropped well down the 54-car order.

“The team and my teammates did a fantastic job as we all pushed on and managed to recover to finish P5 in class and P16 overall – which is a really positive result considering where we were at the start.

“We know there is more to come from us all, so bring on Spa next month!”

Round five last weekend was Pirelli’s home event: the Rally Italia-Sardegna. The Italian firm brought its reinforced Scorpion KX gravel tyres to Alghero, where the rally was based, with Estonian Ott Tanak winning for Toyota.