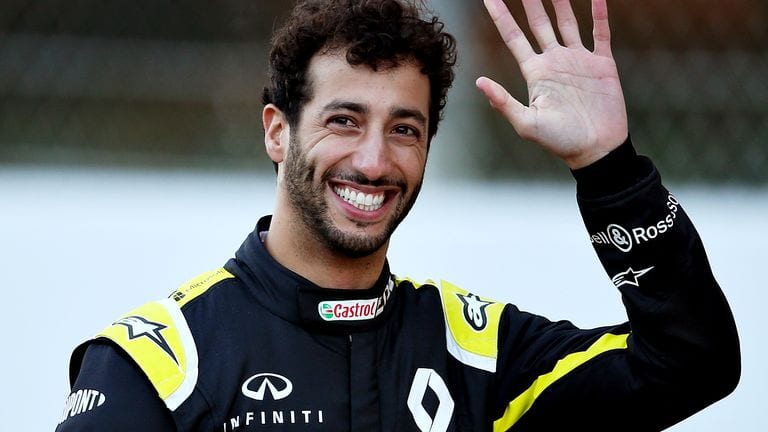 AS ROUND 7 trundles into the forests of the Ardennes for the Belgian GP – and the first of another triple-header of F1 magic – DANIEL RICCIARDO is determined to demonstrate that his disappointing showing at his UK and Spanish races was an aberration.

In 2020, after scoring in three of the first four races, the smiling Aussie came back to earth with a shattering jolt with zero points from his last two Grand Prix.

Spa is recognised by drivers as a true classic F1 track. At 7.0004km the Belgian circuit is the longest of the juggled 2020 calendar – it used to be a massive 14km!

“Spa is so iconic. I think everyone knows why it’s a great place to race and one of the jewels in the Formula 1 crown.

“Nowadays, I actually get more of a thrill from racing there rather than in qualifying. We’ve done so many laps there in the high-downforce cars that a bit of that single-lap rush has gone.

“Eau Rouge is full throttle and in race trim with a big tank of fuel in someone’s slipstream, it becomes a real corner where you’re sliding on four wheels, which is pretty epic.

“There’s also Pouhon and Blanchimont, which are not that easy in race conditions.

“It’s a place where you can overtake, you can defend and it’s high-speed racing.

Another key section is the Bus Stop, formerly a double chicane and now a single turn. It’s very easy to overshoot and for safety reasons, it’s not possible to cut the corner and rejoining the track therefore costs precious time.

Why Pirelli has made the choice

Spa is one of the most challenging circuits for tyres and the asphalt is also quite aggressive in nature.

For the Belgian Grand Prix, Pirelli’s C2 compound has been selected as the P Zero White hard, C3 as the P Zero Yellow medium, and C4 as the P Zero Red soft. This is a step softer than the nomination at Spa last year.

In the Ardennes it’s not unusual for it to be raining on one part of the track but dry on another. And drainage is a common problem, with little rivers forming across the track that can cause aquaplaning – another reason why the tyres in the middle of the range have been selected.

And it’s not just the corners that provide a huge challenge: at nearly 800 metres long the Kemmel Straight cools the tyres down, affecting grip throughout the following corners. Despite the imposing demands of Spa, it was largely a one-stop race last year.

Three of the drivers in the top 10 stopped twice, while Renault’s Daniel Ricciardo did practically the entire race on the medium after a very early stop.

“The reputation of Spa speaks for itself: it’s an old-school track with plenty of elevation and other variables, which the drivers love because of the many challenges and sensations that it delivers.

“This year’s tyre selection is a step softer than last year’s, even though we expect the cars to be considerably faster, as has been the case for most of the season so far.

“Spa is one of the few rounds this year that has not had a date change compared to its traditional slot, so the teams should have plenty of relevant data, even though this is probably the circuit where it’s hardest to predict the conditions.

“So the teams and drivers who are best able to rapidly adapt to changing circumstances tend to be those most rewarded.

“ One difference this year is that the Spa 24 Hours hasn’t taken place as usual a couple of weeks ago: it will be interesting to see if that has any effect – although any rubber that is previously laid down is often washed away by rain in any case.

“Finally, but most importantly, I am sure that Anthoine Hubert will be at the forefront of everybody’s minds this weekend and we would all like to pay tribute to him, a year on from his passing.”

Frenchman Anthoine Hubert died from his injuries, following a horrifying crash in his FIA Formula 2 race during the 2019 Belgian Grand Prix.

Meanwhile the Aussies racers in Formula 2, Formula 3 and the Porsche Mobil 1 Supercup continue to fare well as the categories keep up their unbroken record at Spa of having appeared at every grand prix weekend so far this year.

Following Spa, the F1 caravan heads to Italy for the Italian Grand Prix at Monza next weekend, remaining in the north of the country for its inaugural visit to Mugello the following week, September 11-13 then Russia Sept 25-27, Germany Oct 9-11, before Portugal Oct 23-25, and back to Italy Oct 31-Nov 1.