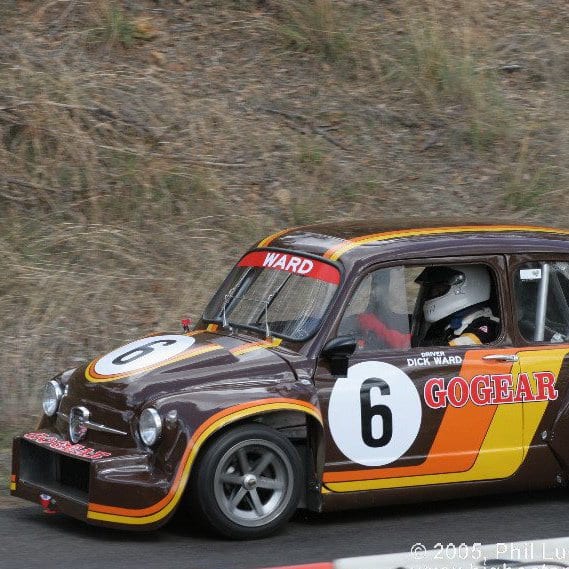 The stuff of legends!

Dick Ward’s remarkable Go Gear Racing Services – in Beaufort St Mt Lawley 6050 – has turned 47.  And Dick’s happy to say to say he’s still supported by many of the true motor sport enthusiasts that supported Go Gear from the outset.  Dick briefly tested the market during 2018, but it proved too much of a wrench for the wily Perth businessman.

“Go Gear has been an incredible journey for me and my team – one which I realise I’m not yet ready to end.    Downsizing has renewed my interest and I’m really excited about our new set -up.    So, it’s onward and upwards for the next 47!”

A huge part of that journey includes Dick’s Fiat Abarth.  As is son Jamie (pictured below), a talented and successful singer/songwriter currently living in the UK.

My reworked column below – published in The West Australian on July 10, 2013 and just as relevant today – might jog a few memories:

DICK WARD’s jaunty 52-year-old Fiat Abarth is a sight to behold as the tacho nudges 10,000rpm in fifth gear at Barbagallo Raceway, and he knows he’s hitting around 220km/h.    Originally built in 196l as an 850cc Abarth TCR, it was raced by the works factory in Europe, and then by Radbourne Racing in London in the late ‘60s.

“I picked up the wreck after it was crashed at Snetterton in 1969, when I was working for Radbourne. I already owned a Fiat 600, which I had just shipped from Canada.   So, I used the body shell from my road car and the mechanicals from the race car to produce my first Sports Sedan.   I shipped it home to Perth from the UK in 1970.”

Now her specs were very different – sporting a 12A rotary engine with a Hewland 5-speed gearbox, a space frame chassis with the Fiat body attached, and the suspension is open-wheel design from the ‘70s/’80s.   She tipped the scales at 550kg with an engine producing 250hp.

Like many a Perth lad back then, Dick caught the racing bug when he went to Caversham circuit in 1958, as a Scotch College teenager.   He debuted there in ’62 in a fibreglass Milano sports car with Austin 7 insides.   Over time he constructed a supercharged Peugeot Elf open-wheeler, which he campaigned successfully around WA for four years.   When Caversham closed in’68, the Elf was sold and the proceeds helped its owner on his way to the US, Europe and, eventually, the UK.

Once home, he began setting up Go Gear Racing Services, while campaigning the Abarth, first with the 860cc rig then a Toyota Corolla donk which quickly brought success – before it blew comprehensively!

Enter Lifelong friend Kim Ledger and his Rotomotion business, installing a 280bhp Mazda rotary driving through a Hewland Transaxle, with major suspension and brake upgrades.  With that under the bonnet, Dick won the 1980 Wanneroo 300 and raced interstate and throughout SE Asia, with lucrative victories in Malaysia and Indonesia.

Nor does he forget a nasty skirmish in the Abarth in 1982, when the steering failed coming down the hill at Wanneroo!  That would make your eyes water.    But by the time he retired the lovely lady they had racked up an amazing record of 27 wins from 30 starts.

That heralded the birth of the first of the extraordinary Go Gear/Rotomotion RX7s.   During the hectic ‘80s and ‘90s their collaborative genius built 18 high tech RX7 Sports Sedans, eight of which were exported to the legendary Tommy Suharto’s stable in Indonesia.

“Not many people are aware of our racing success throughout Australia and Asia during those years but for me it has left me with a lifetime of great memories.”    Not all were pleasant.

“My worst moment by far was when I destroyed our first RX7, trying to catch German Hans-Joachim Stuck from the back of the grid, in the 1984 Malaysia GP at Shah Alam in Selangor.”

It was an enormous end-to-end clash with a back marker, at better than 160km/h, and put an end to the life of that successful car (Dick ended up in hospital and was lucky to escape with his life).   Out of the wreckage came the RX7 Mk2, with its chassis constructed at Aircraft and General in Osborne Park, further input from the renowned K & A Engineering from Adelaide, and motive power by Rotomotion.

It took the Go Gear team to major wins in Malaysia and Thailand, before returning to Australia for the 1986 Wanneroo 300.   Run in appalling weather, Dick had a comfortable lead just short of half distance when the Mazda left the streaming wet track in the Cecchele Esses, and slammed head-on into the fence.   The car was a mess.   And Dick was back in hospital!

“But looking back to its beginning,” Dick said, “it would not be what it is today without people like Kim Ledger, who has always built the engines, and my business partner George Stacey, who did most of the suspension development in the ‘70s.”

And Dick Ward’s precious Fiat Abarth remains a crowd favourite wherever she travels and is sure to entice the fans as she goes on display during this weekend’s Celebration of Sport at Perth’s Langley Park.