F1 is Back Home at Albert Park 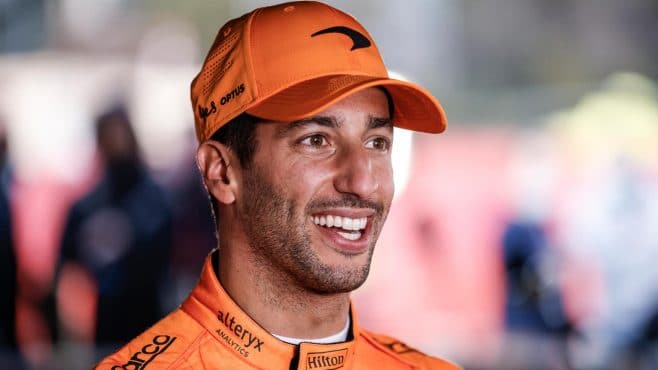 FOR THE FIRST TIME in two seasons, Formula One is back Down Under, with Melbourne’s Albert Park modified with a new layout and asphalt for the first time since that inaugural race in 1996. That 58-lapper was won by Brit Damon Hill, driving a Williams-Renault, after Victoria knocked off the championship from South Australia!

Perth’s Daniel Ricciardo – appointed a Member of the Order of Australia in the 2022 Australia Day Honours – has twice finished fourth here, around that Albert Park lake, although we’ll not forget he did appear on the 2014 podium before receiving a penalty.

And the superstar well remembers the “awesome atmosphere”, for which the F1 Heineken Australian Grand Prix is renowned.

“It’s personal to me because I am Aussie and it’s a home one – and that’s a privilege.

“It’s a beautiful circuit but it’s always been quite narrow and tight, and therefore quite tricky to overtake on.

“So we’ve really tried to exploit some areas to allow more slipstreaming, to allow for more chances for overtaking under braking.

“I think it’s going to be a different spectacle this time round.”

Still to get off the mark in 2022, Daniel is hoping he can score some points for his McLaren team before an adoring home crowd.

Seven corners at the 5.279 km (3.280 mi) Albert Park have been modified with two removed entirely, bringing the total number of turns down to just 14 and shortening the track by 28 metres.

Most significant is the removal of the Turn 9-10 chicane – replaced by a long, sweeping bend. Turns 1 and 3 have been widened on the inside, as has Turn 6, which is now significantly faster. Later in the lap, what was Turn 13 (now Turn 11) has been realigned to tighten the angle.

The penultimate corner (now Turn 13) is another to have been widened, and one of several to have its camber adjusted to allow for different lines to be taken.

For this weekend’s 2022 F1 Australian Grand Prix Pirelli has opted for with a bigger gap than normal between the P Zero medium and softest compounds.

The White hard is the C2 compound, the Yellow medium is the C3 compound, and it’s the race debut for the C5 compound, the softest tyre in the 2022 Pirelli range.

The new asphalt may have reduced the bumpiness of Australia’s most famous street circuit with the surface offering low grip and reasonable levels of abrasion, in moderate wear.

Traction is important to get a good drive out of the short straights and corners, while braking and lateral forces are average.

The severity of the loads is also average, with overall tyre stress again scoring three out of five, on the Pirelli chart.

The whole of the Albert Park track is likely to be very ‘green’ and slippery at the start of the weekend, with a high degree of evolution expected.

And, given Melbourne’s notoriously fickle weather, the forecast chance of rain for Thursday should prove very interesting for the pedallers, and an absolute windfall for the punters!

But overall the weather’s looking good for a great weekend’s racing, with the world watching!

“Compared to previous occasions, and with the drivers not having raced there for two seasons, this year there are a few unknowns to the Australian Grand Prix: first of all the circuit layout has been heavily revised to improve overtaking and, as a result, there’s also new asphalt that should be quite smooth.

“This means the track is likely to offer very low levels of grip at the start, with a high degree of evolution expected over the weekend and an extremely slippery surface if it rains.

“We also head to Melbourne a couple of weeks later compared to previous seasons, when autumn has already started in the southern hemisphere, so conditions could be more variable.

“Last but not least, there is a completely new generation of cars and tyres that the drivers are still trying to learn about.

“All these factors mean that there will be a lot of work to do for teams and drivers in the free practice sessions.

“We decided to opt for the step in the compound nominations because we noticed that there was a relatively small performance gap between the C3 and C4 compounds during development testing, and we believe that Albert Park – with its new asphalt and layout – is a good place to try out this option.”

Albert Park’s great, if you can dodge the traffic!

The Supercars Beaurepaires 400 heads the list of support categories at Albert Park, with four races over the weekend, as well as Porsche Carrera Cup and the S5000 Series.

The Italian event April 1-3 marked the first round of the 2022 GT World Challenge Europe, with traffic and red flag stoppages in qualifying preventing the team from completing a clear run – as they lined up P11 on the grid.

Taking the start of the race, Jordan showed good pace to move up the order in the early stages. At the chequered flag, the #4 crew crossed the line in P13.

“From my side, the start of the race was decent.

“We stayed out of trouble and moved forward which was a positive.

“The overall pace still wasn’t where we’d like to be, but I was able to make progress through the field in the early phases.

“It just wasn’t our day but that’s racing.

“We know what our true pace is and we’ll work hard for a better showing at the 1000 of Paul Ricard Endurance Cup, in France June 3-5.”

Jordan Love, and his magnificent Merc.

The 2022 GT World Challenge Europe is exclusively supplied by Pirelli with the new P Zero DHF tyre – suitable for both the GT3 and GT4 categories –  with nine manufacturers represented on the grid.