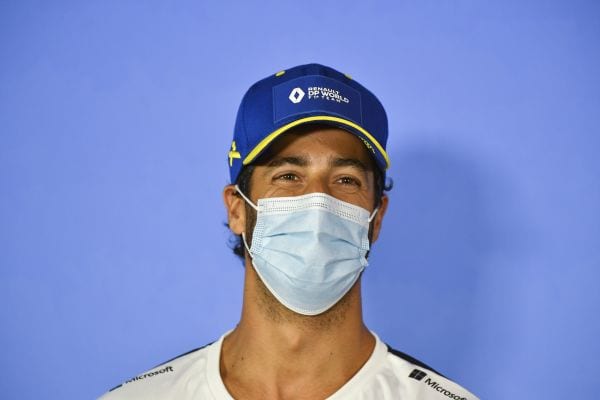 AS THE FORMULA One caravanserai settles in to Budapest this weekend, Daniel Ricciardo is even more upbeat about round three of the championship.

“I can’t wait to get back to Budapest. I’m glad it’s on the revised calendar as it’s one of my favourite circuits,” the West Aussie said this week.

“I’m pumped to have a good one this time around and trying this year’s car on a high- downforce circuit for the first time.

“I’m quite enjoying these back-to-back races and, since we’ve been competitive in Austria, I know we’re going to have a chance in Hungary for a good result.“

Dan’s also determined to get to the bottom of what went down last week with Lance Stroll’s desperate late lunge!

Austria’s Red Bull Ring has been a boon to the start of the 2020 season. And last week’s qualifying round was as good as it gets.

What a showcase to demonstrate the skills, in blinding conditions, of the finest race drivers on the planet. An absolute credit to the FIA and the sport!

Young guns all set for Hungary

F2 – Alex Peroni: The Tasmanian best known for his spectacular skyward launch last year which resulted in a broken back, is in his vital second year in the direct feeder class and knows any hope he has of a F1 seat depend on at least a handful of podiums.

F3 – Calan Williams: Slicks or wets? “…we elected to gamble with the dry tyre. On the formation lap the rain come down, and that left no option other than pitting … and starting from pit lane. The conditions were terrible!”

Porsche Mobil 1 Supercup – Jordan Love: R3 marks Jordan’s debut at the Hungaroring circuit and he knows there’s room for improvement despite a pair of top 15 finishes In Austria:

“We were able to lay the groundwork for the season at the Red Bull Ring but I definitely think there’s potential there.

“I still have a lot to learn and can’t wait to get back on track.”

Like the Red Bull Ring, the Hungaroring is a short four-kilometre lap with several changes in elevation. But it’s much slower and more flowing, putting the emphasis on mechanical rather than aerodynamic grip.

“It’s a track with its own challenges. It’s fast, tight, but that doesn’t mean overtaking isn’t possible.

“It’s quite a busy lap at the wheel, especially the middle sector with corners coming quite quickly one after the other.

“It’s quite a busy lap at the wheel, especially the middle sector with corners coming quite quickly one after the other.“

“With the same tyre nominations and allocations as the first two races – at a venue that is well-established on the F1 calendar – the drivers should have a good idea of what to expect.

“Last year’s race broke a lap record that had stood since 2004, so it will be interesting to see if the times come down further with the 2020 cars, which of course still use our 2019 tyres.

“The Hungaroring is a very demanding track on both cars and drivers, where managing overheating is always essential, and so it’s thrown up a few surprises in the past.

“It’s going to be interesting to see if the disrupted start to the season has any effect on the competitive order this weekend, with some teams bringing new developments as well.”