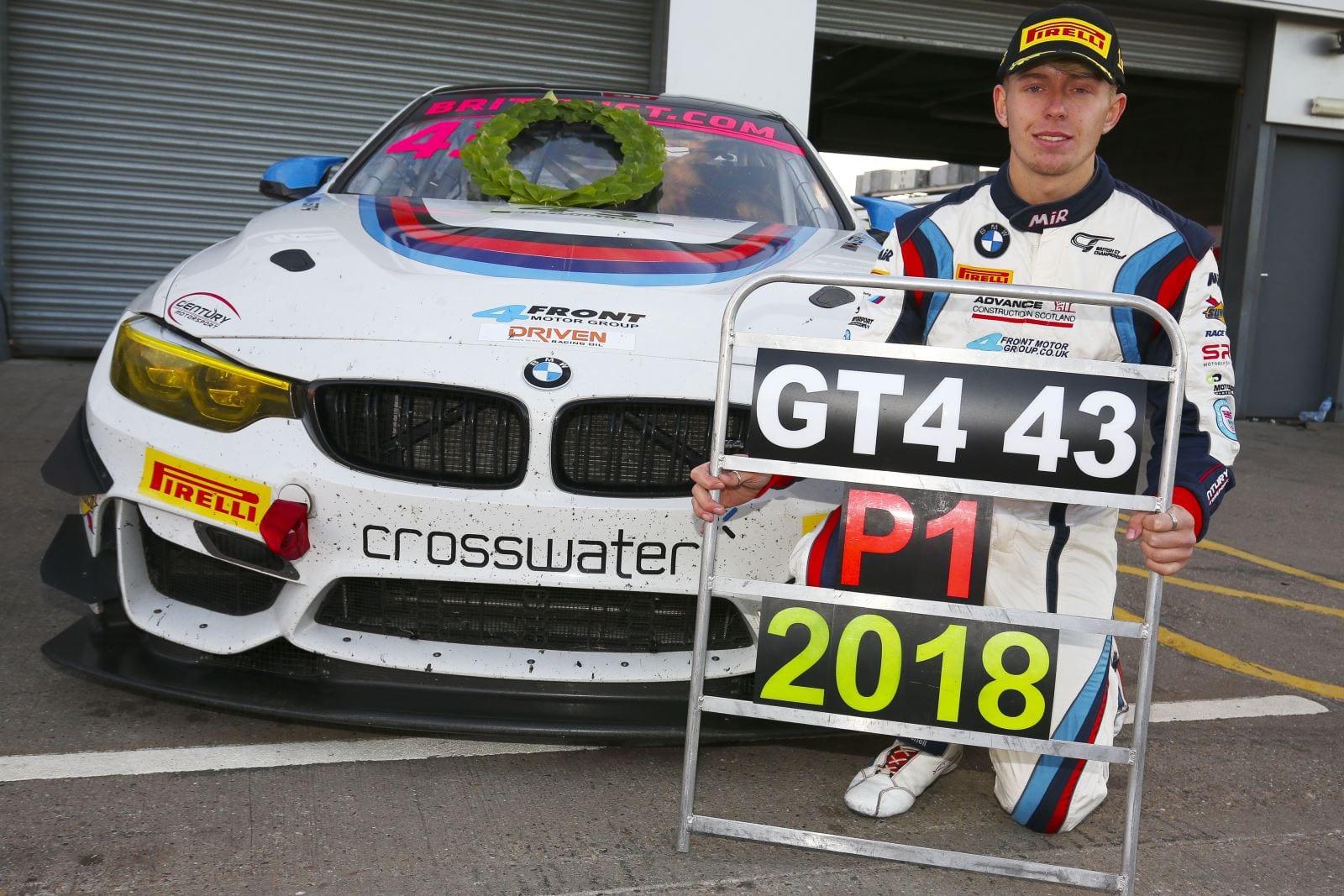 Jack Mitchell is the 2018 British GT4 champion following a drama-filled season finale this weekend at Donington Park where Finlay Hutchison and Dan Mckay claimed their maiden class victory aboard Equipe Verschuur’s McLaren.    The Pro/Am title was also decided in favour of Team Parker Racing’s Nick Jones and Scott Malvern, while Century Motorsport wrapped up the Teams’ title with BMW as well as the Silver Cup thanks to Mitchell.

Tolman Motorsport completed the overall podium thanks to Charlie Fagg and Michael O’Brien plus Pro/Am class winners David Pattison and Joe Osborne but, in truth, all eyes were on the fluctuating championship points table that favoured several different crews throughout the two-hour contest.

With championship outsiders Will Moore and Matt Nicoll-Jones knocked out of the reckoning early on, the stage was set for a showdown between the top-four whom Mitchell led by 10 points at the start of play.

Free from the pressure of a title decider, it was front row starter Mckay who grabbed the early lead from pole-sitter Green and such was his pace thathe set a new lap record with a 1m36.102s, good enough to claim the Sunoco Fastest Lap of the Race Award.    Oil dropped at Redgate then necessitated a Safety Car period after 20 minutes but not before the Verschuur McLaren had taken a harmless trip through the gravel.    Green briefly re-took the lead as a result but was pushed back down to second soon after the restart when Mckay re-passed his BMW.

That saw the championship’s top-four jumbled up in positions two through five, with O’Brien four seconds behind Green and 12s ahead of Mitchell’s co-driver Macdonald, who was a further five seconds clear of Patrik Matthiesen’s HHC Motorsport Ginetta before the pitstops began on the hour.

Hutchison duly emerged with a comfortable advantage after Green and Tuck’s 15s success penalty dropped them down the order.    Instead, it was Fagg – who’d just taken over Tolman’s #4 McLaren from O’Brien – who moved up to second, while Steller Motorsport’s Pro/Am Toyota shared by Richard Williams and Sennan Fielding benefitted from a 30s-shorter pitstop than the Silver Cup contingent to jump from sixth to third.

Behind, Mitchell retained fourth and, with it, had one hand on the GT4 title.    But that was before the #43 BMW was handed a 10s stop/go penalty for a pitlane infringement, which subsequently dropped it to ninth in class.    The advantage then shifted to Green and Tuck who, while running fifth, were on course to claim the title by half-a-point from the crew immediately ahead of them on the road – Matthiesen and Callum Pointon.

Further changes were still to come, though, and not least due to the hard charging Joe Osborne who produced a typically rapid second stint that first saw the McLaren move above both championship contenders in the race classification and then deny Fielding’s Toyota an overall podium and Pro/Am class victory.

For a brief time the championship lead also provisionally passed to Matthiesen and Pointon, who lost it again when the latter was relieved of fifth place by Tuck.

But all of that ultimately made little difference thanks to Mitchell who maintained a clear head post-penalty in his pursuit of the eighth place that would give him the title by one point if Tuck failed to improve on fifth.    The deal was sealed when he passed Jason Wolfe’s Jaguar with 15 minutes remaining.

Ahead of him on the road was now Malvern who’d also made the most of a shorter pitstop to run seventh overall and third in Pro/Am.    That was more than sufficient for him and Team Parker Racing co-driver Nick Jones to win the class title ahead of UltraTek Racing’s Kelvin Fletcher and Martin Plowman whose championship challenge was effectively ended by a split sump early in the opening stint.

Invictus Games Racing’s Jaguar still picked up its best result of the season in ninth thanks to the combined efforts of Wolfe and Jason McCulley, while ProTechnika Motorsport’s Mercedes-AMG driven by Anna Walewska and Tom Canning completed the top-10.

More silverware would come the way of the Equipe Verschuur outfit in the form of the PMW Expo Team of the Weekend Award, to go alongside the team’s maiden British GT victory.

Daniel McKay, #10 Equipe Verschuur McLaren 570S GT4:    “My stint had gone really well to begin with.    Me and Ben [Green] didn’t want to hold each other up and he let me go a little bit which I was thankful for.    I wasn’t thankful for heading through the gravel at turn one though so it wasn’t the most straightforward way of winning a race.

“I knew we had the pace beforehand and the safety car helped us a lot.   Ultimately, I put faith in the car and faith in the team and I think we did a good job.”

Jack Mitchell, #43 Century Motorsport BMW M4 GT4:    “It was a bit of a rollercoaster!    When I started we were in a good position and I knew we just had to keep the pace.    Then I found out we had a stop/go penalty and I didn’t know where that would put us.    Fortunately I came out not far behind the Jaguar but I didn’t know right until the end that that was the position we needed.    The last few laps were quite tense.

“I’m really happy with the result and I can’t thank the team enough.    Century Motorsport have done an amazing job with the help of BMW, too.    I can’t thank my team-mates enough too as without them I wouldn’t be stood here as champion.    I can’t wait to let it all sink in.”

ABOUT THE BRITISH GT CHAMPIONSHIP
For 26 years the British GT Championship has been an intrinsic part of the UK’s national motorsport fabric.    But, having undergone a number of changes throughout that quarter-century, it’s difficult to envisage an era more competitive than the current GT3 and GT4 format.

First organised by the British Racing Drivers Club in 1993, the BRDC National Sports GT Challenge (as it was known until 1995) featured grids of wildly different machinery loosely grouped into vibrant classes comprising sportscars and saloons.

Today, under SRO Motorsports Group’s guidance, British GT grids comprise 30-plus GT3 and GT4 specification supercars tuned to varying degrees of race preparation.    Both classes take their cues from road-legal models – examples include Ferrari, Aston Martin, Lamborghini and Bentley – that have been developed specifically for the track.

GT racing is traditionally seen as an endurance discipline, and British GT honours that by mandating two drivers per car.    Driver changes take place during pit-stops, when tyres are also replaced and fuel added.    Race durations vary and can last one, two or three hours.