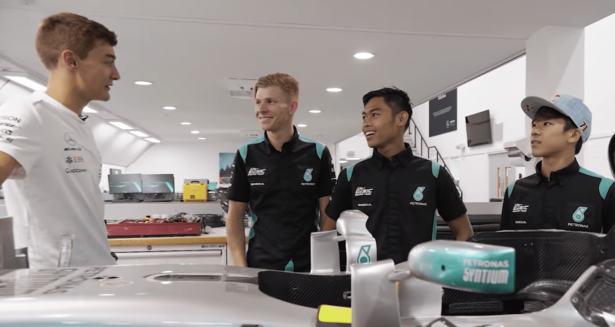 The British Grand Prix, which currently is under threat after 2019, had the highest attendance of any race during the 2018 season drawing a weekend crowd of 340,000 to Silverstone.  Its race day high of 140,500 was also the season’s best.

Silverstone’s owners seem to have invoked a “not financially viable” clause in its current F1 contract.     Curious indeed after 340,000 coughed up big bucks to watch Lewis win yet again!

“With nearly 200,000 spectators at each grand prix, and more than 80,000 packing the grandstands for Sunday’s races across the season, it demonstrates that these big numbers compare favourably with other major sporting events, thus confirming a trend for growth.

“The whole show of a grand prix weekend –  the Formula 1 race, all the support series and the activities around the track – constitutes a great experience for the fans, as the attendance and research figures confirm.   We strongly believe that Formula 1 has great potential which still hasn’t been fully exploited and we are fully committed to improving the fan experience in the future.” Sean Bratches.

The numbers represent an increase of 7.83% compared to 2017.   France and Germany, the two races returning to the calendar in ’17, both outperformed the Malaysian GP’s final event in 2017.   The races with the biggest attendance increase were Azerbaijan, Austria, Bahrain, Canada, Japan and Hungary.

Btw, Mayor of London Sadiq Khan believes “it should be possible” to organise a race in the future and has asked his team to explore options.

Meanwhile F1 sporting director Ross Brawn said this week any efforts to hold a race in London would not be intended to act as a replacement for Silverstone,