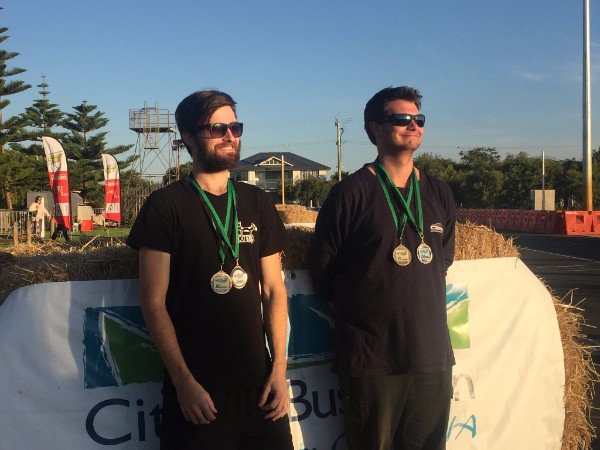 Andy,  a regular Targa West competitor, and his co-driver Madelin Kirkhouse opted for the shorter format, putting the entry money saved  towards a two day guernsey for Cody.

The annual motorsport event – considered Western Australia’s premiere tarmac rally – has attracted well-known Australian motorsport luminaries like Jim Richards and Ross Dunkerton.     The full rally is over four days long and equates to nearly 900 kilometres around Perth CBD, Perth Hills and surrounding areas.     A two-day Rallye is available for those on a tighter schedule.

A keen follower of the tarmac rally scene, Cody Harris is delighted, and grateful to his fellow competitor for helping him something he has always loved.

“My motorsport journey started as soon as I got my P plates,” he said. “You would find me at the Motorplex watching the Rallysprints, and I would religiously attend Targa West in August as a spectator.    The amazing thing about these events is watching the raw talent and the way people are capable of handling a car on its limits.    And for someone you idolise to actually acknowledge you and help you do what they do, is what puts this sport on another level.    Andy has made a dream come true out of pure kindness, and words can’t even describe how thankful and gratuitous I am.”

For those in the motorsport community who know Andy van Kann, this isn’t an unusual offer from a man who is well-known for his generosity in helping young people get a start in the sport he loves.

Cody has teamed up with friend Jacob Zurzolo and driving a Mitsubishi Evo8, which he has been slowly tailoring to suit the event.

Event Director Ross Tapper is impressed with Cody’s mature and keen approach to motorsport.  “Everything Cody has said and done has been in line with how we would want anyone to move up the tree in motorsport,”  said.    “He’s started with a standard car at grassroots level, and as he has begun competing more regularly he’s slowly started to prepare it for Targa level events.     Far too often we see the focus being on building a super-fast car with little regard to improving skill.”
[tockify calendar=”eventsworldwide”]

The 14th Make Smoking History Targa West revs into action August 9-12 with a mix of performance, classic and exotic vehicles racing the clock on some of Perth’s most iconic roads.

Unlike traditional motorsport, where you have to go to a race track to watch, competitors in Make Smoking History Targa West visit a number of locations.

The event kicks off with a Ceremonial Start Thursday August 9 from 11am to 1.30pm in the CBD’s Yagan Square.      Competitors then race the clock over 34 stages in and around Perth, Whiteman Park, Kalamunda (including the infamous Zig Zag), Toodyay, Chittering, Bullsbrook and Malaga.

Sunday’s grand finalé is flat out along Riverside Drive, where the Targa cars join hundreds of other vehicles for the Celebration of Motorsport and Shannons Classics on the Park, turning the picturesque Swan River precinct into a motoring enthusiast’s paradise.

The Make Smoking History Targa West is a free event for spectators.