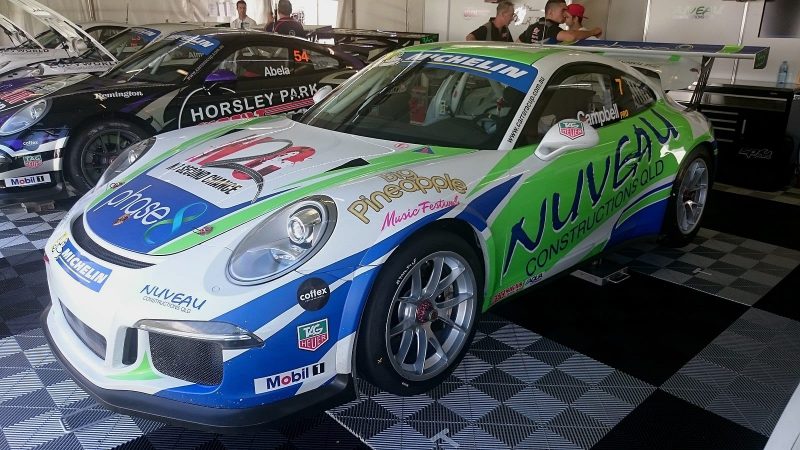 The 21-year-old from Warwick, Queensland, was selected from nine young drivers from international Carrera Cup and GT3 Cup Challenge series around the world after a rigorous two-day evaluation at Lausitzring, Germany.

Campbell was deemed the best candidate and received the lucrative scholarship, which awards him 200,000 Euros towards a position on the grid of the ultra-competitive Porsche Mobil 1 Supercup championship. Porsche’s premier international one-make series competes as a support category to Formula 1 across Europe and the United States, including events at iconic circuits such as Barcelona, Monaco, Hockenheim, Spa-Francorchamps, Monza and the Circuit of the Americas. As part of his inclusion in the Junior Programme, Campbell receives training in communications, fitness and mental preparation and mentorship from the programme’s permanent driver coach and former Porsche champion, Sascha Maassen.

“This is an incredible opportunity for me and an honour to become a Porsche Junior driver in 2017,” said Campbell.

“I’ve thoroughly enjoyed racing Porsches for the last three seasons, firstly in GT3 Cup Challenge and then in Carrera Cup, and, amazingly, I can continue racing with the brand in 2017 in the Porsche Mobil 1 Supercup. It’s great that Porsche provides such a strong pathway for young drivers in Australia to advance their careers, such as I did, both locally and abroad.”

Paul Ellis, Porsche Cars Australia’s Director of Public Relations and Motorsport, believes the appointment of Campbell as a Porsche Junior – the hotbed from which drivers are selected for the Porsche factory team, which this year included FIA World Endurance Champions Mark Webber and Brendon Hartley and 2015 Le Mans 24 Hour winner Earl Bamber – is the next step in a long and successful career with Porsche for the young Australian.

“Matt is a phenomenal talent, and we are thrilled, but not surprised, that he won the Porsche Motorsport Junior Programme Shootout. He has been a stand-out performer in both our GT3 Cup Challenge and Carrera Cup championships over the past three years, and we wish him all the best as he began this new challenge in 2017,” said Ellis.

“From all of us at Porsche Cars Australia, and on behalf of our vast Porsche racing family, we wish Matt all the best for the 2017 season and beyond.”

Campbell then joined Porsche Carrera Cup Australia in 2015, initially demonstrating immense pace in a 911 GT3 Cup car before translating this into strong race results in the latter half of the season. In the final four rounds (11 races), Campbell scored 10 top two performances, including six race victories, and finished third for the season behind eventual champion Nick Foster and David Russell.

The Australian is one of two drivers to be confirmed for the Porsche Motorsport Junior Programme; 18-year-old Austrian Thomas Preining is the new Porsche Junior to race in Porsche Carrera Cup Deutschland, run as support to the DTM, and given 150,000 Euros towards his campaign. Preining was selected ahead of over 100 drivers that applied for the entry-level Porsche Junior position after a strong maiden season in single-seaters, placing fourth in the 2016 ADAC Formula 4 Championship.

Matt Campbell is one of the stand-out young drivers in Australian motor racing, underpinned by a tremendous story of his rise in the sport.

Campbell is from humble beginnings; he grew up around motor racing in the small country town of Warwick, Queensland. His grandfather, Bill Campbell, ran the local race track, Morgan Park Raceway, which was where Bill and ‘TC’, Campbell’s Auntie, taught Campbell how to drive… and how to race.

Campbell then started his ascent of the Porsche Motorsport Pyramid – a key step in his short racing career. Campbell raced in the 2014 Porsche GT3 Cup Challenge Australia season, quickly turning heads for his speed in the 2005-spec Class B entry against a field mostly consisting of the 2011-spec Porsche. Campbell wrapped up the Class B title with one round remaining and was handed the opportunity to race a Class A Porsche for the season finale. Campbell claimed pole position and dominated all three races (with a total winning margin of 27 seconds).

Campbell continued his ascent of the Motorsport Pyramid in 2015, moving to the Porsche Carrera Cup Australia championship. Again, he quickly gained attention by qualifying second at Albert Park – his second-ever Carrera Cup event. His true ability was then demonstrated at the tail end of the season.

Campbell finished in the top two positions in the final 11 races of the season, including six race wins.

This is a snippet of a tremendous motorsport story – one that will take Campbell to Europe in 2017 to compete the world’s premier one-make sportscar championship, the Porsche Mobil 1 Supercup.