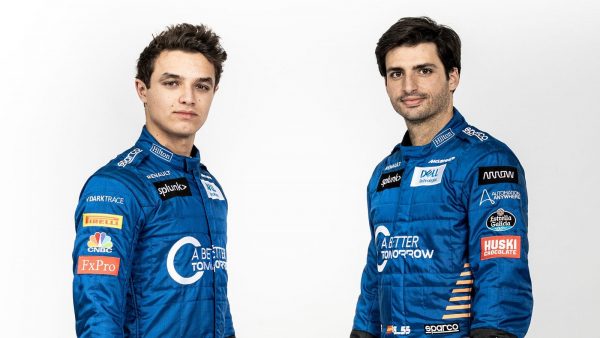 McLaren finished a handsome fourth in the 2019 constructors Championship, edging out the battling Renaults of a devastated Daniel Ricciardo and Nico Hulkenburg. Nico lost his drive, and steps out of Formula 0ne this season. My guess is he’ll be back.

Late last night, Perth time, McLaren unveiled their 2020 MCL35 Formula 1 challenger in a glitzy display from the McLaren Technology Centre in Woking, Surrey, the home of its 800 employees..

Drivers Carlos Sainz and Lando Norris are fired up for their second season racing with the team, performing at the launch like the supestars they’ve become after crushing their Renault engine builders last year. The presented car beome,particularly the exraordonary Spaniard

They proudly proudly presented the car (the jury’s still out on the one striped leg of their race-suits) resplendent in the iconic papaya and blue originally chosen by founder Bruce McLaren.

Next Wednesday the two young lads will drive the MCL35 out onto the track for the first time, during pre-season testing in front of the world’s motoring media at Spain’s Circuit de Barcelona-Catalunya. They’ll share driving duties during February 19-21 and again from February 26-28.

“I’m immensely proud of the entire team today. Last season we delivered what we set out to do – secure a hard-fought fourth in the Constructors’ Championship.

“Our positive on-track momentum and the renewed energy in the team has seen us grow our valued partner family and global fan base and we look forward to a hugely competitive season.

“While we are enjoying going racing again, we remain measured and focused, and all of us at McLaren keep pushing fearlessly forward.”

History reminds us of the origins of McLaren, founded in 1963 by legendary Kiwi F1 racer Bruce McLaren. His brilliant team made its debut at the 1966 Monaco Grand Prix. They were the first to construct a car around a carbon fibre monacoque, a process now commonplace in most forms of motorsport.