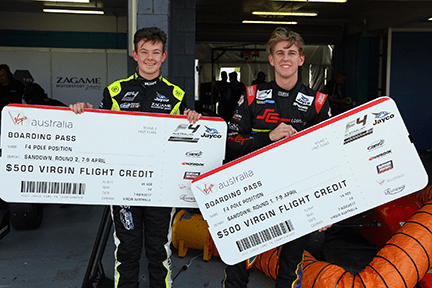 NICK LOWE and rookie AARON LOVE are the two  West Aussies to line up in this weekend’s opening of the CAMS Jayco Australian Formula 4 Championship at Melbourne’s Sandown Raceway.

It’s the first time two rounds are held across the one weekend – with three 30 minute races today and a further three for Round Two tomorrow.

“We had a good run in the first [qualifying], ” Nick said. ‘Then just couldn’t get the lap and didn’t quite have the setup in the second one. Don’t know what happened but these things happen, that’s alright. A pole in the first one, rain on Sunday; we’ll see how we go, should be good fun.

“It did change a lot for that second qualifying. I had so much understeer, I was just piling it into lock everywhere,” Nick said. “But that’s alright, we’ve got Timmi here, he’ll sort it out.”