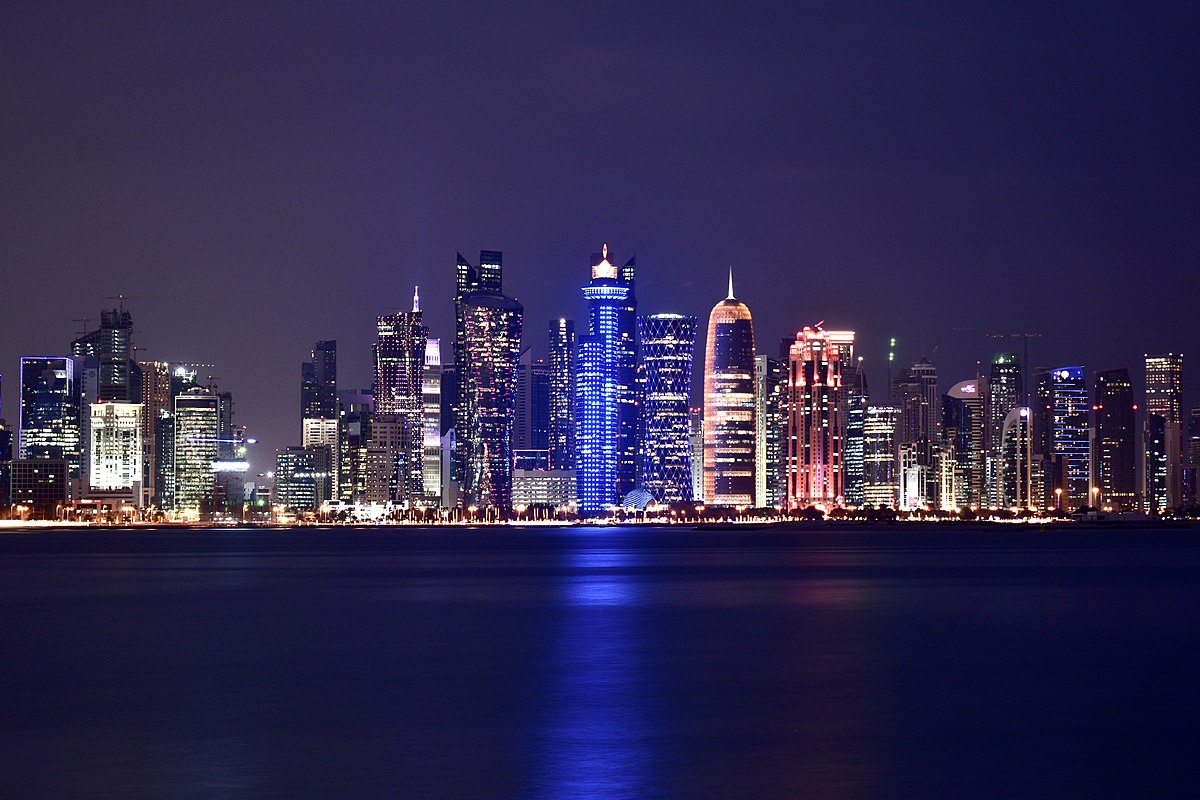 ONLY ONE of the 20 drivers has ever raced at the Losail International Circuit, host of this weekend’s first-ever Qatar F1 Grand Prix.  And that is the Uralkali Haas Team’s Nikita Mazepin!

Now the young Russian, son of Utalchem billionaire Dmitri Mazepin, may not be the most popular bloke in the F1 pit, given some erratic ways in his debut season. But he reckons his greater knowledge of the Losail Circuit gives him a better chance finishing higher than his the usual bottom of the field slot.

We Shall See, Come Sunday!

“The Qatar F1 race is going to be an exciting one because I’ve raced there in my first-ever race in Formula MRF in 2014.

“So it’s a track that I enjoy, although I haven’t been there in a long time.

“It’s a track where a lot of sand remains. I’m looking forward to going, after very different types of races.”

Qatar F1 is just one of four races held this year in the evening, under floodlights. It’s one of those simply wondrous cities dotted thorughout the United Arab Emirates

DREADFUL WEATHER in Mexico following their GP forced serious delays for teams getting their freight shipments to Brazil, resulting in dramas for some, including McLaren which claimed it lost an astonishing 36 hours of pre-race prep, adding to the continuing woes of Lando Norris and Daniel Ricciardo.

But Qatar is back to a reasonably level playing field – except for the edge Nikita claims, which would be fulfilled handsomely if it should result in him getting into Qualifying Two!

For the very first Qatar Grand Prix, held over 57 laps, Pirelli has opted for the C1 compound as the P Zero White hard, C2 as the Yellow medium, and C3 as the Red soft. It’s the fifth, and last, time this year that the three hardest compounds in the range have been nominated.

Existing data and simulations from teams point to Losail being a high-severity circuit with very demanding corners – similar to Silverstone or Mugello – and quite aggressive asphalt, with grip affected by sand from the desert surrounding the track.

Losail’s start-finish straight is just over a kilometre long, followed by a quick succession of 16 corners to make up the rest of the lap.

And that, according to Pirelli’s Mario Isola – the man who knows most about such things – means the tyres are always working hard, leading to a reasonably high degree of degradation.

•             The 5.38km circuit still has its original surface from 2004, which offers high grip and has become quite abrasive over time, accentuating wear and degradation.

•             Despite the presence of strategically-placed artificial grass around the circuit to keep away the sand from the desert, the asphalt could still become very dusty thus affecting grip.

•             Turns 12 to 14 form a triple-apex right-hander, making up almost a single high-energy 5.2g corner that is slightly reminiscent of the famous Turn 8 in Turkey – only in the opposite direction.

•             This floodlit race means that the evolution of track temperature over the course of the grand prix should be quite different compared to a standard afternoon race, with the potential for a big drop-off as the race goes on.

As we know, in the desert, there’s a big difference in temperature between day and night.

While the Qatar race takes place at 5pm local time, FP1 and FP3 happens during the heat of the day, so only FP2 and qualifying provide a truly representative picture of the likely race conditions.

•             Surprisingly, there are no support races at all scheduled and the circuit hasn’t been used a lot recently, meaning there’s no rubber laid down prior to F1 cars running.

So drivers can expect a slippery track at first and a high degree of track evolution. The surface could also be ‘reset’ by sand blowing onto the track over the weekend.

“Qatar will provide a thrilling new challenge at a unique venue with its own special character, so we’re very much looking forward to our first visit.

“Coming to a new circuit isn’t a novel experience for us though, and we rely on simulation data as well as track information that we collect in advance to select the nomination that will be used.

“We haven’t had the chance to measure the roughness of the asphalt with our instruments but the promoter provided us with very useful information on the asphalt characteristics.

“From what we can see, the hardest tyres in the range will be well-suited to Losail, due to the quite abrasive asphalt and the very demanding corners.

“But as we’ve never actually raced there before, we’ll only get a true picture of how the tyres really work on this circuit once we arrive.”

Oscar on the Right Heading for F1?

AUSTRALIA’S 0SCAR PIASTRI could soon join compatriot Daniel Ricciardo on the F1 grid, after signing with Alpine as its reserve driver for 2022, following a successful testing stint last week in Barcelona.

Mark Webber’s 20-year-old protégé – a member of the Alpine Academy since the start of last year – currently leads the FIA F2 championship with just two rounds remaining, on the back of his F3 title as a rookie in 2020.

A race seat in F1 is likely to come with Alpine, with former world champion Fernando Alonso entering the second and final year of his contract in 2022.

Piastri, who Webber rates “as one of the best three juniors in the world”, will get the opportunity to drive at least two grand prix weekends in 2022 (perhaps even Melbourne, with new rules requiring teams to run a rookie during free practice sessions).

Should Piastri wins this year’s F2 title, one of the sports quirkier rules prevent him from returning to the category next season, meaning he’d be without a race drive in 2022!

Sébastien Ogier – seven-times world champ and among the greatest of drivers – is favoured to take out the weekend’s Rally Monza, the final round of the World Rally Championship. It takes place this weekend at the Rally Monza

And I sincerely hope my charming old mate, with whom I spent a delightful few days in Coffs Harbour once upon a time, can bag his eighth!

•             FOUR FEMALE DRIVERS recently have just had their first taste of Formula 3 machinery at Magny-Cours in France, as part of an initiative from the championship organisers that is supported by Pirelli. The four young women taking to the track were Nerea Martin and Irina Sidorkova from the W Academy, as well as Maya Weug and Doriane Pin from the Iron Dames squad.

What does 2022 Hold for Calan Williams?

•           After a testing season in F3 with Jenzer Motorsport – which included a podium finish – Perth’s Calan Williams is now hard at it preparing himself as well as he possibly can for three full days of F2 testing, at the Yas Marina Circuit in Abu Dhabi in December. with Trident Motorsport.

“I’m working on my fitness as much as I can, and will be spending plenty of time with Formula Medicine to be as physically and mentally prepared as possible, as well as plenty of track preparation and simulator work – to not only learn the new circuit, but also the new driving style required for the step up in car.”