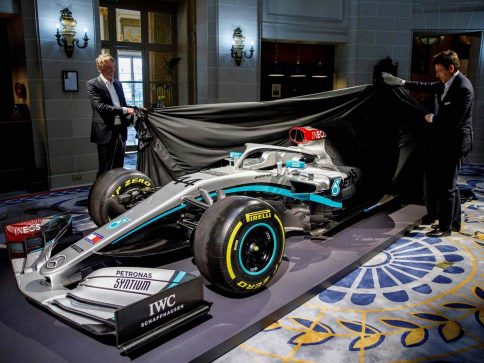 In the stately surrounds of London’s Royal Automobile Club overnight, a silk blanket was gently lifted off the new Mercedes-AMG W11 F1 Silver Arrow. Very tasty, indeed! But much the same look apart from a splash of burgundy red – reflecting Daimler’s newest collaboration, with a British billionaire and his flagship petrochemicals Colossus, Ineos.

Sir James Ratcliffe and the affable Toto Wolff (pictured above in our featured image, courtesy Getty) did the unveiling for this curious partnership of powerhouses, described by the Independent as “a synergy, a meeting of minds, an ideas emporium”.

And now a decent foothold into F1!

Meanwhile, Toto and Mercedes have one clear focus this year – snaring the 2020 Formula One Constructors Championship, while giving Lewis Hamilton whatever he requires to secure a record seven world titles. And both those objectives and theirs to lose!

“With everything we do, we have to question if it is the right activity. We, as Daimler today, see the advantages that Formula 1 as (a) marketing platform gives us and we see it in the data.

“That is the underlying condition why we are doing it. Formula 1 is one of the greatest returns on investment that we do.”

Mercedes’ 2020 challenger hits the track running today for the first time in a shakedown at Silverstone before six days of fine tuning in Spain, ahead of the season opening Rolex Australian F1 Grand Prix in Melbourne’s Albert Park,

It’s one of the most recognisable symbols in the world – elegant yet simple. But where did that Mercedes star come from? Check this out, courtesy motorauthority.com