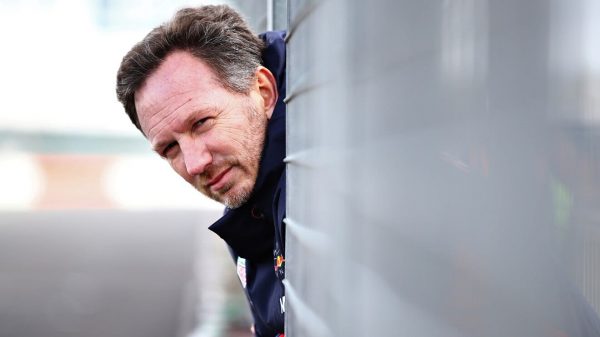 YOU’VE NO DOUBT HEARD that the terrifying shunt which put F1 Championship leader Max Verstappen out of action in the British Grand Prix cost Red Bull a cool $2.4 million.

Given the sport’s self-imposed spending cap, that’s a tough bunch of change to find in a tight budget.

But with his gun pilot hospitalised, briefly, following the worst accident of his career and his proud RB16B motor a write off, a deeply unhappy Christian Horner OBE was left venting his spleen.

And the Brit was in fine form, although he insisted in making one point clear:

“At the point in time when you have a driver in hospital and the extent of any injuries have not yet been made clear, your car has been written off and the stewards have penalised the driver seen to be responsible, it is natural that emotion comes into play, for all involved, whether you feel wronged or victorious.”

So, now we know the effective costs of an accident like Silverstone and the frightful ramifications that has on Red Bull’s current budget, according to Team Principal Horner.

But the 47-year-old, who for 16 seasons has been at the helm of one of great F1 teams of the modern era, could not resist a parting shot.

“The reality is that Hamilton has met his match in a car that is now competitive, and I agree that both drivers need to show each other respect, but Hamilton was the aggressor on Sunday (in the British GP).”

The Hungaroring – a Natural Amphitheatre

This weekend we’re back in Europe for round 11 and the Hungarian GP – with all eyes on Max to see what effect, if any, the reputed 51G jolt has had on Dutchman’s psyche.

After all, the day after the crash he told Horner he felt he’d gone rounds with Tyson Fury

Nor should we forget Aussie Daniel Ricciardo’s vastly improved form last up. He has won here in Budapest and he’s desperate to add more points to McLaren’s Constructors’ Championship tilt, and give his stocks a boost!

“It’s a real driver’s track and one of my favourite tracks on the calendar,” he said this week.

Hungary concludes the first half of the ’21 F1 season, with team members heading to all parts for the traditional summer break, resuming in Belgium for the Rolex Grand Prix August 27-29 around the seven crazy kilometers of Spa-Francorchamps.

•             The three compounds in the middle of the range nominated: C2 as the P Zero White hard, C3 as the P Zero Yellow medium, and C4 as the P Zero Red soft – exactly the same as last year. The Hungaroring doesn’t place particularly heavy demands on tyres, with these well-suited to the tight and twisty track, especially if the weather is warm.

•             In contrast to the sweeping and fast corners of Silverstone, the circuit feels almost like a kart circuit: the track is narrow, old-school, and has a non-stop series of corners that means the tyres are constantly working, with no rest.

•             Overtaking is tricky, and this is an important factor when planning the race strategy, as track position is key.

•             The high summer temperatures, alongside the fact that the circuit is situated within a natural amphitheatre, means that there’s very little airflow: making the Hungarian Grand Prix hard work for both the cars and the drivers.

The Best Strategy is Not Always Obvious

“Tyre-wise, we’re not expecting any particularly big surprises from the Hungaroring, which has been a constant on the calendar and signals the end of the first half of the season.

“The defining characteristic of the track are all the tight corners in quick succession, with no long straights to cool down the tyres, and hot weather.

“This makes the circuit actually more demanding on tyres than it initially seems, so some degree of management is likely to be needed on the soft compound in particular.

“As a result, the best strategy is not always obvious – with different approaches often yielding a similar overall race time, depending on the individual circumstances.

“That’s why we’ve often seen some tactically intriguing races here, keeping the final result in doubt right up to the end and providing an interesting challenge for the engineers.”

Aussies back for FIA F3 Battle

After three rounds of the FIA F3 series, with its bumper 32-car field featuring Aussies Jack Doohan and Perth’s Calan Williams, it’s back to the Hungaroring for three races supporting the big boys.

Jack is sitting pretty in third place, with a hefty 72 points, while Calan is further back in 15th and sporting 15 points – with plenty of work to do this weekend.

Formula 3 uses just one compound each event and in Hungary that’s the P Zero Yellow medium compound. Drivers get five sets of slick tyres – as well as two sets of wet tyres, which are unlikely to get much use in the heat of the Hungaroring!   handy at Spa).

The medium tyre offers excellent all-round adaptability to the constant cornering demands of the circuit,  even in the forecast hot weather.

•             One of Pirelli’s biggest events of year takes place during the same weekend as the Hungarian Grand Prix: the Spa 24 Hours in Belgium, for which Pirelli brings 13,000 tyres (including those for the support races). Perth’s Jordan Love lines up for the challenge with the SFS Automotive team.

•             The 2022 18-inch slick tyre test programme continued after the British Grand Prix with Aston Martin, Haas and Red Bull taking to the track. It carries on after Hungary, with Ferrari, McLaren and Mercedes driving on Tuesday and Wednesday after the grand prix.

Meanwhile, the hunt is on for a replacement venue for the cancelled Australian Grand Prix, to allow F1 to maintain its 23-event schedule. And don’t be surprised if the 2021 Bathurst 1000, Supercars’ crème de la crème event, is postponed!