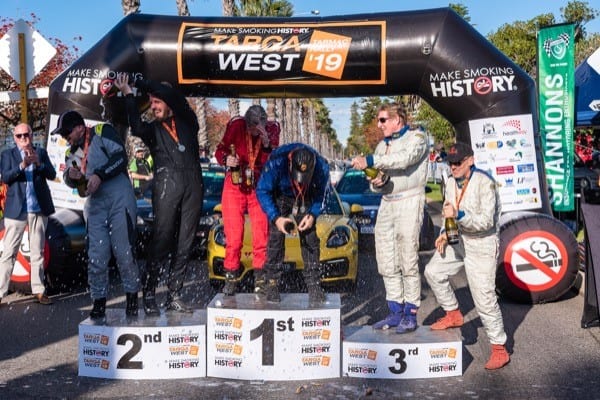 “Targa West is a very well-run event and sets a high benchmark. Everything from the organisation, the officials – who were all so professional – to the safety and comradery, all of it has been first class, and I’ve travelled around the world competing in off-road rallies. We’ve had a ball.” – Garry Povah.

While not in direct contention, invitationals Garry Povah and Steve Armour restarted the rally Sunday in their 2011 Holden Colorado after earlier retiring with differential issues. While they may be Targa West rookies, the team is vastly experienced and awarded in off-road racing.

The event blasted off last Thursday from city central Forrest Place and finished mid-afternoon Sunday after six stages with 35.61 competitive kilometres, all of them with kerbs, gutters and tight turns. And a scorching 34 degrees – the hottest day on record for Targa West.

Huge crowds turned out to check out 1000+ cars on display in the Shannons Classics on the Swan, a massive collection of stunning classics along Riverside Drive, and the Celebration of Motorsport on Langley Park coupled with the All Ford Day.

In Make Smoking History Targa West’s 16-year history, only five champions have taken the title in the Competition Modern category and this year there was a sixth.

Mark Greenham and Steph Esterbauer in their 2006 Mitsubishi Lancer Evo 9 started the final day with a healthy lead of 3:28 minutes ahead of second place, husband and wife team Jeffery and Catherine Foster in their 2019 Porsche GT3 RS.

For Greenham, preservation today was critical to take the win. “It feels brilliant and the past five years of competing have definitely been worth it,” he said. “I’m so happy and very relieved – today was so different to yesterday in that we could hear every noise and were thinking ‘is the diff going to go’ and things like that – we started hearing things. But it’s been great, we’re very happy.”

The fight of the day was between Jeffery and Catherine Foster in their 2019 Porsche GT3 RS who began 11 seconds ahead of Will White and Matt Thompson in their 2006 Mitsubishi Lancer Evo 9.

White was not going down without a fight. After pushing all day to make up a few seconds, White / Thompson were just 1 second behind Foster / Foster going into the last stage. It was a challenge that went down to the wire. White drove his Evo to the limit to take second place by the narrowest of margins, just 1 second, and 2:22 minutes behind the winner.

“It was an epic battle. We are absolutely stoked especially with the fuel pump issues we had at the start of the rally and breakdowns on liaisons. Matt has done a fantastic job calling notes and keeping me on track, without him, none of this would happen,” said White, from Dardanup.

“Thanks to the organisers, volunteers and all competitors, especially to Mark [Greenham] on taking the win, we’re all good mates and the comradery between us all is just awesome.”

Jeffrey Foster said it’s been a tough two days, but he finished on the podium without a scratch on his Porsche.

“We’re really happy with our result, it was a ding-dong battle with Will White with just a second separating us. Will did a great job,” Foster said.

“We were starting to get worried about tyres yesterday, and this morning it was all going well but everything has to come together and someone else got it right and we got it a little bit wrong. Still, we’re very happy.”

Fourth went to Brett Morse and Rodney Ng in their 2019 BMW M2 Competition who were sitting in third place earlier in the rally but lost time due to tyre degradation.

After retiring yesterday with overheating issues, Peter Rullo and Jimmy Marquet (pictured above by )restarted the rally Sunday, albeit out of contention, and showed just how fast they can go winning two stages in Malaga in their 2019 SSC Lotus Exige Targa GT and finishing equal first in two stages in the City of Perth.

Another duo who seemed to come into their own today showing a blistering pace was John O’Dowd and Toni Feaver, who won the first stage of the day in Malaga and the first City of Perth stage, finishing in seventh place overall in their leased 2004 Porsche 996 Turbo.

They had to replace a clutch after Day 2 which incurred a 2.00-minute time penalty, and saw them out of contention.

In the Competition Classic (pre 1986), there was no stopping Simon Gunson and rookie co-driver Peter Morley in their 1971 Ford Capri Perana. Despite starting the day with healthy lead of 4:43 minutes, Gunson / Morley still won four out of six stages to finish 4.55 minutes ahead of Tim Wolfe and Scott Beckwith in their 1974 Porsche 911 Carrera RS.

Gunson only knows one way to drive his Capri – hard and fast.

“Right from the blocks we went out hard and kept that going all the way through. Actually, we just drive hard all the time because we just love driving this car,” Gunson said. “We love driving fast, but we conserved a bit today. The car didn’t miss a beat, it’s been a great rally.”

Second-placed Wolfe said it was his second Targa West with co-driver Scott Beckwith in what’s been a great rally.

“We went in with a strategy to finish on the podium, and we’ve done that. We couldn’t get near the Capri, but we stuck to our strategy and we’re very happy with our result,” Wolfe said.

Absolutely thrilled to be in third place 2:42 minutes behind Wolfe/Beckwith were cousins Nathan Ellement and Keven Ellement, pictured above in Turn7 Media’s image above of their 1985 Chevrolet Corvette C4.

“To get this car to come third on our second proper attempt at Targa West is absolutely awesome. We are stoked and we’ll be back bigger and better next year,” said Nathan.

Kim Stewart and Frank Zanotti finished fourth in their 1965 Ford Mustang a further 59 seconds behind.

In Targa 165, rookies Ben Pang and co-driver Brandon Chin wowed the crowds in their 1999 Honda Civic to take a solid win, 17.39 minutes ahead of Nick Rahimtulla and Lisa White in their 1973 Alfa Romeo 2000 GTV 105. The Targa 165 category restricts drivers to 165 kilometres per hour.

In his first rally event, Pang was clearly very happy to win his category.

“It’s been a very good rally, a lot of fun and I’m very satisfied with what we’ve done. I’d like to thank my crew, they are all very hard working. Also thanks to the volunteers, it’s so hot and they stand there and smile and wave, at least we get a bit of breeze when we drive fast,” said Pang, who is originally from Borneo.

In the Targa 130 category, husband and wife team Jurgen and Helen Lunssman took a clean sweep of stage wins in their electric Telsa 3 Performance+ car, winning the class by 8.39 minutes ahead of David and Anna Hodges in their 2013 Holden VF SSV. The Targa 130 category restricts drivers to 130 kilometres per hour.

Jurgen Lunssman said he was thrilled and relieved.

“I’m relieved because there have been great expectations on the electric car, we’re representing part of the future and there’s a big community following us, and we’re so happy to take the win for them,” Lunssman said.

“Last year I shared the podium with the Ford Capri as Simon Gunson’s co-driver, and this year I’m on the podium with my wife in a Tesla. The inclusive nature of Targa West great and the competition is really healthy.”

The 2 Day Rallye is a shortened version of Make Smoking History Targa West for competitors who can only commit to the weekend, and they race the same stages as the other competitors.

“It’s been a great rally. Absolutely I’m going to do the full event next year if I can,” Pernechelle said.

Make Smoking History Targa West is owned by Targa West Events and is only possible thanks to a dedicated committee and an army of 500 volunteers.

Event Director Ross Tapper said that he was proud of his team.

“A few months ago, we didn’t even know if we’d be having a rally.

“To be able to come back, organise it and run it in a different time of year to our usual August date has been a feat.

“I’m very proud of the organising team and all of our officials, and of course to all the West Australian competitors who took part.

“Without them, and our sponsors, there wouldn’t be a Make Smoking History Targa West.”

As usual, my sincere thanks go out to Dianne Bortoletto and her team at Pronto PR