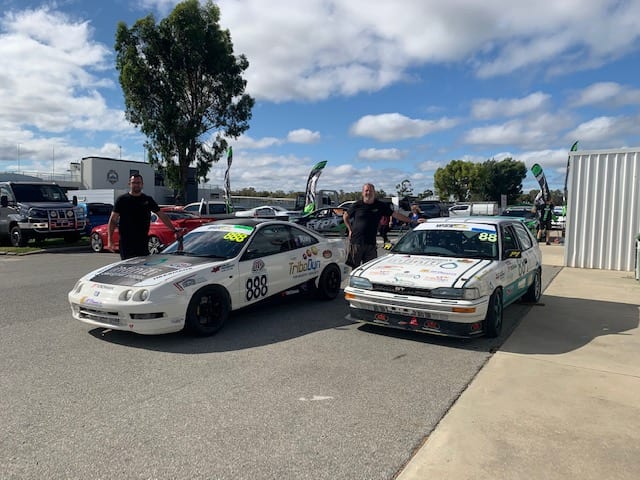 Father and son racers Tim and Ben Riley campaigned their super special Honda Integra at the weekend in the Improvement Production field for the first time at Wanneroo.

“Ben took a five second penalty in Quali which put him alongside my little 1600 on the grid for R1.  Pops got the start, but only for 30m as the 2L Integra took off like a scalded cat! The Type R just kept going faster throughout the weekend, to finish 4th overall against 6L Monaros, Turbo WRXs, BMW M3s – and all in a normally aspirated 2L Honda!” Tim Riley

“It was great to race with a Dad again. I don’t think we have raced in the same class since back in go karts. It’s a great feeling both lining up out there. And I can’t wait for the cold, dry winter weather to have a crack at the lap record!” Ben Riley

The Integra was piloted at Wanneroo Raceway by Ben, a 38-year-old ex-cop turn ed pipeline security agent who moved from an open-wheeler Formula Vee and superfast F1000 – to a tin-top Honda with an extraordinary history!

Honda first introduced the Type R Integra to the Japanese domestic market in 1995, focusing on minimising weight while enhancing rigidity. It was early days, but it not the financial windfall the proud marque had expected.

The factory went all out, striving to meet FIA certification requirements of the model’s motor and the chassis changes, designed specifically to make the car more competitive in N-series and World Cup racing.

The Type R first hit the Australian market in 1999 and, in a bold move to boost its launch profile, the parent factory provided 12 race-prepared DC2 Integras for a “one-off” support race – known as The Young Guns – at the 2000 Gold Coast Indy 300.

“Our Integra is one of those Indy 12, and anecdotal evidence suggests ours is actually the one driven by Marcos Ambrose, who went on to win the race,” according to Tim Riley.  “That led to a career in V8 Supercars for Marcos and back-to-back Supercar Championships, before the Aussie headed off to further his career in the USA.”

Watch the action video below of Marcos Ambrose and the Integra DC2 Type R from that Gold Coast race – 20 years ago!

In ensuing years, that car moved from the Gold Coast to Darwin, to Canberra, then Sydney where it scored the 2009 IPRANSW Championship with Jordan Cox at the helm. Jordan recalls the car’s weakness was engine reliability.

“Around 2013, engine reliability issues were overcome, but the only solid information we have is the car broke the Bathurst lap record in 2016 for Improved Production Under 2L cars (2:27.979), but didn’t finish the race!” Tim Riley, joint owner.

Check out the video below of Harrison’s brave move around the outside at 195km/h at Sydney Motorsport Park in November 2019.

That was the Honda’s last race before Tim and Ben Riley bought the car, preparing the Integra Type R for its WA debut at the weekend during Wanneroo Raceway’s 51st Birthday celebrations – as Riley Racing Team’s Tribodyn 2020.