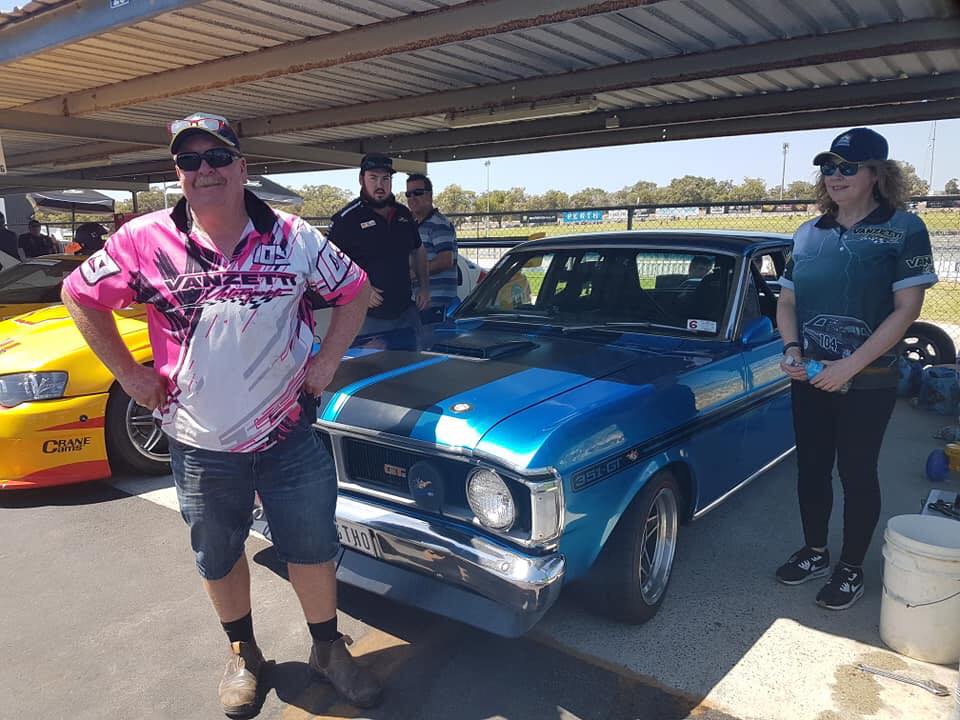 After 15 years of building this car, Moora farmer SHANE VANZETTI  (and family) have finally finished it!

“In 2002 my Dad Michael and I went to watch the racing around the houses in Northam,” Shane recalled.    “We said we need to do that.     “So we found a car in the quokka for $1800 and stripped it bare for a full restoration.     We had lots of GT parts that went straight into it. Tyler Vanzetti piloted the XY last month around the streets and foreshore of Dennison and kept her out of the bales of hay and the sea.     She was only running the little 302 V8.     But later on we plan to build a fire-breathing 351, running quad Webbers .

“Many people have made this dream come true including Michael Vanzetti, Grant O’Brien and his team at M & S O’Brien, Ryan Brown, Colin Blee, Gye Smith and Shuba Johns at Moora Auto Pro, Ian Bell, Paul Rumbold of Rumbold Ford,  and Superoo Falcon Spares.      I sure hope I didn’t forget anyone.”

“I’m so proud of my boys.    They performed beautifully at Moora Speedway’s first meeting of the new season.     In his first drive in  a street stock Falcon for many years, Jordan Vanzetti drove a fantastic race from the rear of the field, learning his new car and kept awesome lines.     Taj stepped up into the missile – current WA 2 car driven by Kooper Greig in the state title in Bunbury earlier this year – and progressed well with extra power.     We thought the event might not go past half time as the grader and roller got bogged !     A big thank you to grandad Michael Vanzetti for investing so much time into getting Jordan’s car ready.

Hi Adrian ! Yes the moffat signature is in the car !

In 2011 i heard Allan Moffatt was going to be at the Dowerin field days which I’m a farmer so I attend regularly.      I’m half-way through my build so I took my glove-box panel there for him to sign.     He was very obliging and we talked for ages. Also WIth me was my Dad Michael, who raced an XP Falcon sports sedan at Wanneroo for eight years and they chatted away and he even told!ad some secrets about the top loader gearbox.       My build took a long time because my boys were racing junior sedan all around aus and New Zealand so my priority was all about them.    I have only one competing now who is 12 so I have a bit more time on my hands ! My second son is in his 3 rd year at uni doing a degree in engineering of motorsport so he has help me get it finished ! He going to drive it as he was a high ranking junior driver and drives the uni race cars ! There a quirky story about the roll cage that I will tell you soon ! Cheers shane Vanzetti

y boys, jordan 24 years old raced juniors and just started racing street stock in a falcon ! Tyler (21) raced juniors all around Aust and nz ! Aust 6 in Mckay in 2013 and wa 4 in 2014! And 3 championships at Moora ! He is now at Edith Cowan uni doing a Batchelor of technology of MOTorSPORT !brooklyn (18) raced juniors all around Aust and nz ! Raced national titles at Mckay , Esperance , mildura and tasmania and qulalify at the pointy end and won heat races but couldn’t quite win them ! Moora championships wins about 3 . Taj 12 has raced 1.5 seasons at Moora in the new star division and has moved up in to top stars this season ! Just moved out of our learner car to our best car which is the current wa 2 car which we offered our car to South Australian junior driver KOOPER Greig drove in the state title in bunbury in April and came 2 nd !