Silverstone UK Was A Blinder! 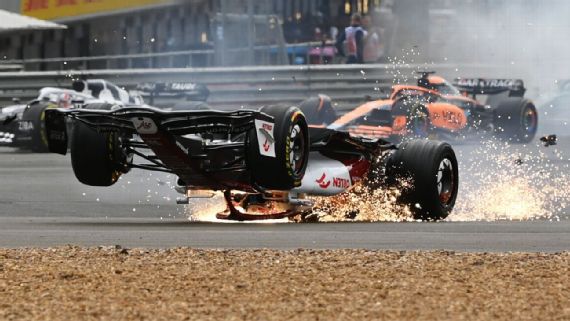 The Most Horrifying of Crashes

WOW! IF YOU FAILED to watch last weekend’s F1 event at Silverstone UK you missed one of the great races – and among the scariest crashes I’ve ever witnessed!

How young Alfa Romeo pilot Guanyu Zhou emerged virtually unscathed from that horrific incident can only be down to the introduction in 2018 of the much-maligned halo – a titanium hoop positioned above the driver’s helmet.

Without that, I doubt the Chinese lad could have survived. And he well knows it.

This weekend the teams have headed 1500kms across the British Channel to Austria’s famed 4.318km Red Bull Ring, a short and sharp rollercoaster with just 10 corners and constant elevation changes.

The Styrian Hills circuit is also home to the second sprint weekend of the F1 season, after Imola where – in 2021 – Daniel Ricciardo recorded his last win!

It’s the Softest Boots for the Red Bull Ring

PIRELLI brings to Austria the three softest tyres in the range: C3 as the P Zero White hard, the C4 Yellow medium, and C5 Red soft.

Last year there were two races at the Red Bull Ring held back-to-back: this weekend is the same tyre nomination as the second race there, designed to help put on a show by increasing degradation and creating more overtaking opportunities.

On that occasion, the winning strategy was a two-stopper: one opening stint on the medium, followed by two hard tyre stints. Of course, the compounds and structures are different this year.

In case of wet weather, always a very real possibility in the Styrian Hills, teams have up to six sets of Cinturato Green intermediates and three of Cinturato Blue full wets available.

They could well come into play.

“Traction and braking – key points of the Spielberg rollercoaster”

“The asphalt at the Red Bull Ring offers reasonably low grip on a low-severity circuit, which makes it possible to bring the softest tyres in the range.

“This helps us in putting the focus on entertainment, at a venue that has often delivered exciting races in the past, thanks to a busy and compact lap that’s essentially a series of short corners.

“Traction and especially braking are key here: with a  particular risk of lock-ups in some of the tricky downhill braking areas.

“Maintaining the performance of the rear tyres throughout the lap is also vital to ensure adequate traction.

•             Alpine, McLaren, Red Bull and Williams will stay on after the Austrian Grand Prix as part of Pirelli’s testing programme for next year’s tyres. McLaren and Williams will test for two days, with the other two teams putting in one day each.

Aussie Jack Doohan held on at Silverstone to notch his vital first win in F2 – the FIA’s feeder series. Pirelli has nominated the P Zero Yellow medium and Purple supersoft for Austria – the third time this combination, with an extra step between the compounds, has been seen this season after Imola and Baku. Each driver has five sets of slicks (three medium and two supersoft) this weekend, which includes a 28-lap sprint race Saturday, and Sunday’s 40-lap feature.

For the first time this season, the softest tyre in the F3 range – the Red soft compound – is the sole nominated tyre, one step softer than the selection for 2021, when the medium compound was available at the Red Bull Ring.  Drivers get four new sets across the weekend, with no tyres carried over from the previous round at Silverstone. Saturday’s 24-lap sprint race is followed by the longer feature race on Sunday.

Meanwhile Perth’s Supercup rookie Aaron Love endured a tough debut with the Martinet by Alméras team, finishing in 30th position with a puncture.  “Pretty tough first Supercup weekend and it just went from bad to worse. We made a few mistakes with the plan for practice which didn’t let us truly show our speed. Started from 29th and got up to 15th and no doubt I could’ve gone further but it wasn’t meant to be. A car spun in front of me and with nowhere to go I just didn’t quite make it around ending with a puncture ruining the race. That’s just racing and we’ll live to fight again,” said the disappointed Carrera Cup Australia driver.

And this weekend big brother Jordan Love debuts at the legendary Nürburgring-Nordschleife – dubbed the 20km ‘Green Hell’ – in the #6 Mercedes-AMG GT3 for the 6h race of the Nürburgring Endurance Series (NLS). He teams up again with Haupt Racing Team, alongside DTM drivers Austrian Lucas Auer and Arjun Maini from India.

“I’m super excited to be making my debut at the Nürburgring-Nordschleife with HRT. The circuit is on every racing driver’s bucket list and I can’t wait to hit the track,” the young Aussie said.

Supercars this weekend return to Townsville – where I’ve just spent a couple of weeks visiting my delightful family, and checking out the impressive street circuit – and the weather is a very pleasant 24C!

The Silverstone UK feature race of W Series, the international single-seater motor racing championship for women, attracted a peak UK TV audience of more than 1 million viewers becoming the most-watched motorsport event in Britain since 2014 outside of F1. Broadcast live across both Sky Sports and Channel 4 for the first time, huge numbers tuned in to see Jamie Chadwick (Jenner Racing #24, UK) win her sixth consecutive race and continue her perfect start to the season. The series continues July 22-23 July at Circuit Paul Ricard, Le Castellet, with the year’s fifth race in support of the Formula 1® Lenovo Grand Prix De France 2022.

The Pirelli social media community was involved in creating a special commemorative helmet for multiple bike champion Valentino Rossi, decorated with messages from fans. Motorsport Director Mario Isola presented “The Doctor” with the helmet at Misano in Italy recently to mark his switch to GT racing.

The Rally Liepaja in Latvia, round five of the European Rally Championship, took place on gravel last weekend with former Pirelli Star driver Hayden Paddon being one of the highlights of the entry list. The rally was won by local driver Martins Sesks.