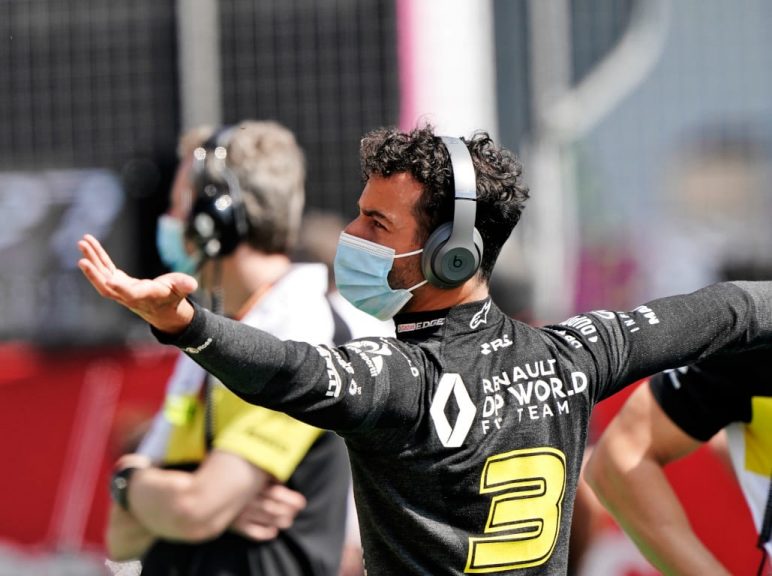 BARCELONA’S Circuit de Catalunya in Spain, where all F1 teams tested back in February/March, heralds the end of the second triple-header so far this intense racing season – with struggling Sebastian Vettel all kitted out in a brand spanking new Ferrari chassis. Let’s see if that makes a difference!

The 70th anniversary at Silverstone last up did not leave much to celebrate for West Aussies Daniel Ricciardo, who had a shocker, F3 racer Calan Williams or Porsche star Jordan Love.

Jordan’s race was over almost before it had even begun.  The Australian in the #6 Fach Auto Tech Porsche was taken out on the first lap of the race.

“My start wasn’t too bad, and I was on my way up through the field (then) I got a push from behind and spun, before being hit by another car.

“The incident brought out the safety car and my Porsche had to be recovered.

“I’m really sorry for the team. I was looking to make up ground in the race after a difficult qualifying but never had an opportunity to do so.”

“Overall it was a very good weekend, with two very solid P14 finishes in such an incredibly strong 30 car field.

“The highlight was a move I made on two drivers at once into the very fast Copse corner.

“The team at Jenzer Motorsport did a fantastic job with the car all weekend, and I can’t wait for Round 5 kicking off in Barcelona.”

Daniel, of course, was brought back to earth with a resounding thud after the brilliance of his previous round 4th at Silverstone.

But, he’s as upbeat as ever!

“To take 24 points as a team from the two races is certainly very good; not only from a performance perspective but also for the Constructors’ Championship.”

“Barcelona’s not usually the most exciting of races for overtakes as it’s a high-speed circuit and quite hard to follow the car in front.

“I think if we can qualify well, there’s no reason we can’t have a strong result.

“We’ll aim to put it all together this weekend, and it’s exciting to have a change of scenery!”

And it’s high summer for the running of the 2020 Spanish Grand Prix, although the forecast this weekend is for comparatively moderately mild conditions.

This was actually the same compound choice as last year, because the Montmelo circuit is always a big challenge for tyres at any time of year. The main reason for this is the high-energy corners such as Turn 3, which generate considerable G forces.

The Circuit de Catalunya was resurfaced two years ago, but the track has progressively matured since, bringing the surface more into line with how it used to be.

“Although this is the third time the teams drive at the Circuit de Catalunya this year, the conditions they will encounter this weekend are likely to be very different: both because of the warm weather, and all the improvements made to the cars since winter testing.

“The usual high temperatures in Barcelona in mid-August will increase thermal degradation on a track already well-known for being tough on tyres, so it’s going to be particularly important to manage them and control any overheating that affects traction.

“Free practice will be crucial to accurately establishing tyre behaviour under these challenging circumstances.

“With the current cars being faster than ever – as Silverstone recently confirmed – and the Spanish Grand Prix never being run in August before, this should be the most demanding race for tyres we’ve seen at the Circuit de Catalunya.”