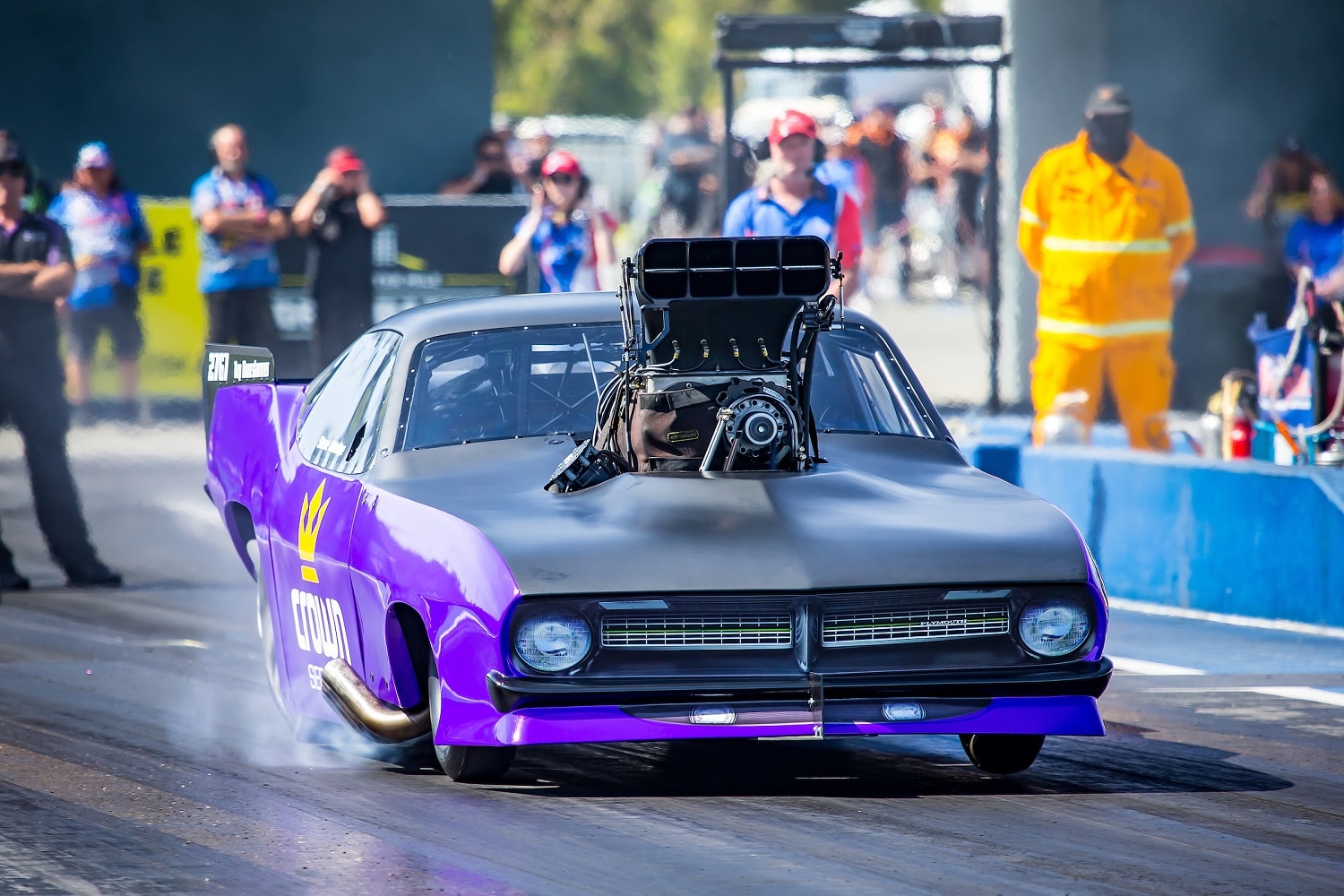 Most racing drivers don’t turn up to an event expecting to take home one of their opponent’s vehicles, but four years ago that was exactly what Top Doorslammer competitor Steve Aldridge did. Aldridge, who will race this Saturday and Sunday at Perth Motorplex in the 50th Annual Westernationals, was driving a heavy 55 Chev Top Doorslammer at the time, with an ageing chassis.

At the 2017 running of the Westernationals, he spotted a Plymouth Barracuda being raced by Sydney’s Frank Mamone. A few conversations later and Mamone went home with an empty trailer, while Aldridge had a newer, much lighter chassis to throw his supercharged Hemi motor into.

The change proved tough initially, but following a few seasons of work on the car it turned into a reliable ride that was almost a third of a second quicker on the quarter-mile than his previous machine.

“It was a real handful at first,” Aldridge said.

“I never seemed to know from one run to the next which way it was going to go.

“Most of the time it would dart one way or the other.

“We added more bar work to stiffen the car and it became much better.”

The Barracuda might have been a headache to make consistent, but Aldridge said he has reached a point where he is very satisfied with the car’s performance. It is a regular five-second runner and has run a best of 5.781sec.

“To be honest we are happy with where the car is. If I had a massive sponsor we could push our gear towards the edge, but we are not going to go and blow stuff up to go a little quicker.”

That isn’t to say Aldridge doesn’t want to win when he heads to the 50th Annual Westernationals this weekend at Perth Motorplex. He just knows where the limits are.

“As long as we can do the 5.8sec. and 5.7sec. times regularly then we will be at the pointy end and that is sufficient for me. Obviously, we want to win more and go faster but it is very reliable now.”

If you’re an Australian Top Doorslammer racer, there’s no better place to be than Perth right now. The six-round Direct Mining & Industrial Summer Slam has proved to be an attractive proposition for Western Australia’s plentiful Top Doorslammer teams, who can chase a championship without having to travel across the country.

“The Summer Slam has been received really positively, we are lucky that we have a state where we have so many Top Doorslammers that can race.

“To have a full field every time is good for the fans, and good for us as we are actually racing.

“We like being the headline act, we are treated well by the track and encouraged to turn up to every event.”

A 60th birthday is coming up in a few years for Steve Aldridge, but he doesn’t want to slow down any time soon. Drag racing might have arrived later in his life than for some (he started about 15 years ago), but it is here to stay.

“I am not sure what I will do with my time when I stop. I don’t golf and I don’t fish, drag racing is an all-consuming thing.”

Qualifying begins 11am Saturday and 11.30am Sunday, with the main show from 5.30pm each night. For more information, visit www.motorplex.com.au.