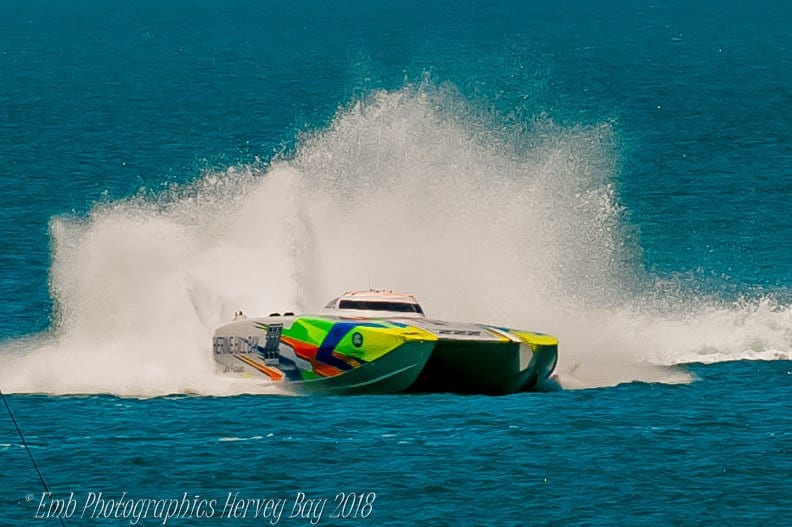 Supercars Todd Kelly and mate Peter McGrath get the choccies

Leading the Championship points heading into the weekend, 222 ideally needed to complete all races to take the title, but in Offshore racing, nothing goes to plan.    Having qualified 3rdon pole, the team went into the first race on Sunday confident of the boats reliability and speed shown throughout the 2018 season.    On lap 3, driver Todd Kelly and throttleman Peter McGrath felt a concerning shudder, which upon inspection revealed a broken prop shaft.    With only 1 hering propeller remaining, the 222 Offshore Superboat was towed back to the Marina to inspect the damage.

The 222 team had never dismantled and rebuilt a prop shaft between races before, but with the title now in the balance having received a DNF in the first race, they quickly got to work. The team needed all hands involved, including that of Kelly and McGrath and in 30 minutes, the prop shaft was rebuilt, back on the Superboat with a new propeller and the boys were back out on the water for the 2nd race with only minutes to spare.

Another strong start for the team in race 2, in considerably rougher conditions, saw the 222 boat pushed to the limit for the 30-minute race.

“Todd did an incredible job for us and he’s very handy on the wheel and also on the tools,” said throttleman Peter McGrath.

“In Offshore Racing your track is always changing and the wind picked up considerably between the first and second race, which meant that it was quite choppy.   But I had no choice, I had to push the boat to ensure we finished in the best position for points.   Todd handled it all so well and he got us across the line in 2nd, which was enough to win the Australian Championship.”

“The weekend was a fun challenge for me both on and off the water,” said Todd.     “We arrived at the event only needing to finish one race to seal up the championship for team 222 and the tables quickly turned midway through race 1 with the prop shaft failure.   The entire team did an outstanding job to get the boat back on the water and it made for an extremely exciting and rewarding race 2.”

“The pressure was on in conditions that I hadn’t yet experienced in the boat and we were doing over 200km/h, completely airborne, with someone else in charge of the throttles… it was a real buzz.   It was great to experience another form of top level Australian motorsport.”   Nissan Motorsport Team Owner, Todd Kelly.

The newly crowned Australian Champions will re-rig the superboat over the coming weeks and pull the smaller 750HP engines out and install 2 x twin supercharged 1200HP engines ready to contest the Bridge to Bridge race and attempt to break the record on the Hawkesbury November 25.