The Spartan Pulls the Pin 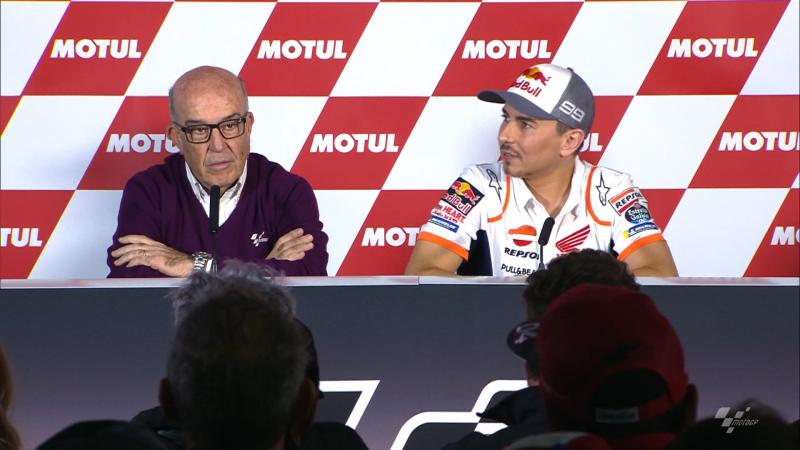 To last 18 seasons at the top of your game at this most formidable of motor sports is a true reflection of just how good you are. As Jorge Lorenzo this week decided to announce enough is enough, the 32-year-old from Spain – that uber proud country I called home for nearly four years – the five-time world champion was stepping away from an extraordinary MotoGP career.

And, as he broke the news of his retirement to his myriad of fans across the globe, alongside him was MotoGP Supremo Dorna Sports CEO Carmelo Ezpeleta (pictured above) in recognition of what undoubtedly is one of the most successful careers of all-time.

The Dorna head honcho proffered the ultimate in accolades to the young man known as The Spartan, elevating the Spaniard to MotoGP Legend status!

Jorge Lorenzo debuted in the 2002 125cc World Championship, actually missing the first day of his first Grand Prix because he was still too young – his 15th birthday fell on qualifying day, thus allowing him to hit the track flying.

By his fourth race Jorge had locked away his first points, then six podiums as a rookie. And a year later, in Rio, he won his first Grand Prix.

By 2006 he had won his first World Championship, staying with the 125s in ‘07 and winning nine times in a stunning defence of his title.

MotoGP beckoned and Jorge Lorenzo powered his Yamaha to pole in his very first outing in the premier class!

After podium finishes in his first races, he took the top step at Estoril, on only his third MotoGP championship race. In doing so, Jorge beat two guys he would battle throughout his career – Dani Pedrosa and then teammate Valentino Rossi.

The rest, as they say, is history

Jorge Lorenzo had many memorable clashes with Casey Stoner, before the Aussie great retired in 2013.