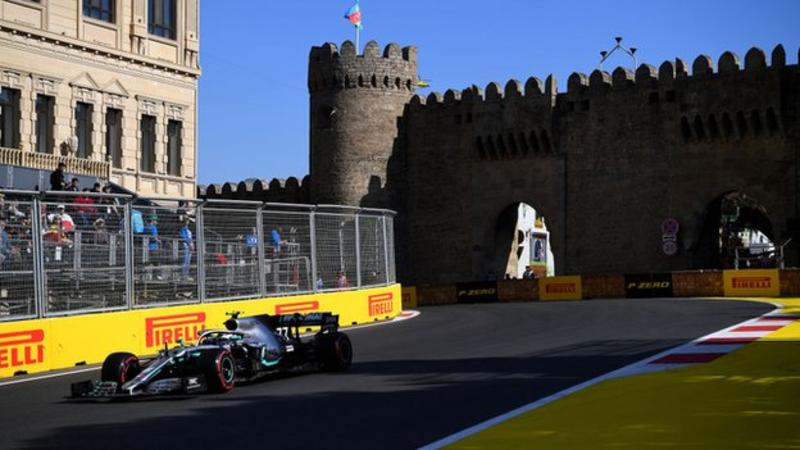 Much delayed start – or no races at all!

This is a highly edited update, thanks largely to BBC Sport’s Chief F1 writer, ANDREW BENSON.

The global coronavirus crisis has sent shock-waves through sport and Formula 1, like all other major organisations, is grappling with the question of how to move forward. The first six races have been postponed – or cancelled completely in the case of the Monaco Grand Prix, the jewel in F1’s crown – and no-one is quite sure what happens next.

An F1 season cannot start until the world has clear signs the virus is suppressed. The sport requires international travel, and it’s impossible to know at what point countries will start to ease restrictions on that.

The Azerbaijan Grand Prix on 7 June is suggested as an opener in the regularly-revised working plan/calendar currently circulating among F1’s teams. In this scenario the season would carry on from Baku, slotting in as many of the abandoned races as possible on the way.

If that proves possible, the Dutch Grand Prix would move to be twinned with either the Hungarian or Belgian races which bookend August, and perhaps Spain could be crammed into the (northern) summer as well.

After that, once the long-haul races start, the hope would be to continue with Singapore, Russia, Japan, USA and Mexico on their existing dates. The season finale in Abu Dhabi – which contracts dictate must be the final race – would move back a week or two, and Vietnam and Bahrain slipped into the space created. Brazil looks vulnerable.

But will the world be ready for Azerbaijan to host a race in early June? Or Canada a week later? Or France and Austria in late June and early July? And so on. No-one knows.

What if there are no races until the (northern) autumn?  It is entirely feasible that F1 will not even be able to start until the Singapore race in mid-September.

Even then, it would be possible to complete the eight-race criterion set out in the rules to constitute an F1 World Championship.

All options are on the table

The teams have waived their normal consultation rights over the calendar to allow the sports bosses to do whatever is necessary to salvage the season.

F1 and FIA heavies are considering extending the 2020 season into early 2021 (with the heralded ’21 changes now shunted to ’22), and then starting the 2021 championship later than normal.

Of course, teams will still be asked for their views.  But there is a general acceptance that once the season starts, the schedule will be brutal – that is just the way it has to be!

Which races are likely to be left out?

Even before the Australian Grand Prix was called off on 13 March, F1 already had a list of events that were deemed ‘expendable’ in 2020 – Bahrain, Brazil, Monaco and Spain.

The last three were on the list because they either pay no fees – in the case of Monaco, and Brazil under its existing contract – or a relatively small one, in the case of Spain.

Bahrain is one of the best-paying races, but the Crown Prince, the de facto boss of the race, is amenable to deal with and would be prepared to accept his race not happening this year on the basis that he would receive a quid pro quo further down the line.   Since then, things have moved on. And it is now likely that F1 will try to squeeze Bahrain in towards the end of the season on consecutive weekends with nearby Abu Dhabi.

As for which other races disappear, that depends entirely on logistics.  An attempt will be made to organise the calendar by geography as much as possible.  And if the championship cannot start until September, for example, the chances of European races surviving reduce because of the change of seasons.  And china is an unlikely survivor.

The vast majority of the sport’s AUD$3.1bn annual income comes from two places: race-hosting fees and broadcast rights. Both will be reduced this year.

This explains why, for now, races are being postponed.  And the reluctance to call off races in the first place.  Because contracts dictate that if the race promoter cancels the race, they still pay their fee.  If F1 does it, the sport loses the money.

Contracts with television companies complicate the matter further, in that there must be a minimum of 16 races to guarantee full payment of rights-holding fees.

But that does not mean TV money will disappear if there are fewer than 16 races, because payments are subject to a sliding scale as the number of grands prix drops below that.

It is inevitable that the sport will take a financial hit this year, which means teams will too, because they’re paid via a complicated formula based on F1’s income.

The big, well-funded teams such as Mercedes, Ferrari, Red Bull, McLaren and Renault should be able to absorb this without too much pain. But for those at the other end of the grid, such as Williams and Alfa Romeo (which is the Swiss privately owned Sauber team with a new name thanks to a cash injection from Fiat), this could be a difficult time.

F1 is aware of this and has already started conversations about how they can help if needed.

But there is also the wider question of the sport itself.  The F1 Group is leveraged with a significant amount of debt.  So how big a risk is the inevitable drop in income to the company that runs the sport?

The sports’ phalanxes of bean counters have long, sleepless nights in the months ahead – alone with their abacuses!

But, the fact is as long as F1 can hold eight races this year, there WILL be a world champion. All the rest will simply be how and why!

Any errors here are mine, and mine alone!  And. just how the eSport scenario impacts, even mitigates, the F1 bottom line is anyone’s guess.