Women Front and Centre in Miami! 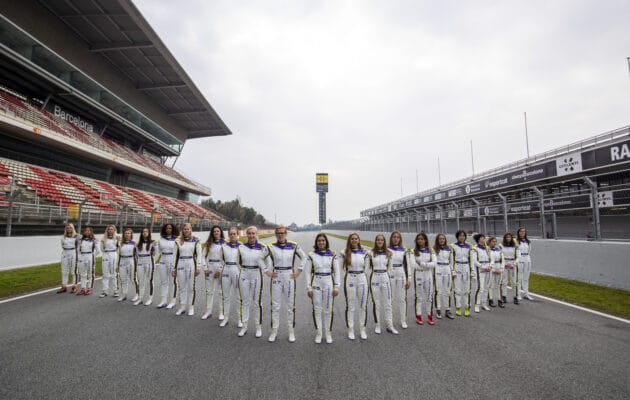 WOMEN’S PREMIER LEVEL motor racing is back to the fore this weekend with the W Series featuring a double header on the card at Formula One’s debut at the Miami street circuit.

The 5.41-kilometre Miami International Autodrome is set in the Hard Rock Stadium Complex – in Miami Gardens, the home of the Miami Dolphins – with 19 corners, three straights, elevation changes and a chicane.

“As W Series continues its rapid rise, the driver talent and the quality of the racing rises with it.

“W Series produces fantastic entertainment on a global stage alongside Formula 1, showcasing the talent of women racing drivers at the top of their field, and I can’t wait to see how the 2022 season unfolds.”

W Series reigning champ Jamie Chadwick begins her title defence in Miami, competing during 2022 for the Jenner Racing team. In her two victorious seasons with W Series, the 23-year-old Briton has won six races and finished on the podium in all except two of her 14 starts!

SBS has W Series covered this season! Check out:

“The track is ready for anything this weekend, including the threat of an invasion by the feral iguanas who like to hang out around these parts. The first F1 race where marshals have been equipped with nets and taught how to wrangle them?”

With the 11th venue to host a grand prix in the USA being brand new to everyone, Pirelli has had to rely on simulation data to come up with the tyre nominations.

As a consequence the tyre mogul has chosen the three in the middle of the P Zero range: White hard C2, Yellow medium C3, and the Red soft C4 – the most commonly-used one all year, and also the most versatile.

Top speeds of 320kph – an average of 223kph – with drivers on full throttle for some 58% of the lap – weather permitting! Turns 11 and 17 are the two main overtaking opportunities, with three DRS zones.

According to Mario Isola, Pirelli’s F1 head honcho, this selection is the most suited to the 57-lap race, with smooth asphalt that offers reasonable grip and the forces at work on the tyres being about average for the season.

The brand new asphalt is likely to lead to a high degree of track evolution, especially at the start of the weekend, with the Porsche Challenge and W Series as support events.

The humidity will be a factor for drivers, with a high risk of rain and wind on the Florida coast this time of year.

“There’s been a huge buzz of excitement around the first Miami Grand Prix, where the track has some similarities to Jeddah, although there are some parts that are slower and more technical than Saudi Arabia: especially the section from Turns 11 to 16.

“The rest is a very quick layout, running anti-clockwise, which puts the emphasis on the tyres on the right hand side of the car.

“We’re expecting the usual rapid track evolution and a smooth surface with the new asphalt, but the track has been jet-washed at high pressure, which means that it should offer quite good grip from the beginning.

“Because it’s a fast track the cars are likely to run a low to medium downforce set-up, which could lead to a bit of sliding in the high-speed corners on the hard compounds in particular.

“For any new track our choice tends to be on the conservative side, so it will be interesting to confront the simulations with real data.” MARIO ISOLA

From massive crashes to controversial overtakes, Perth’s Supercars round had it all. Local Jake Kostecki qualified a career-best third for Race 11. He finished ninth.

Herbert Diess, VW chief executive, told his board this week the company would pull in more money with a F1 commitment than without one. “You just run out of arguments,” Diess said. “There has been speculation for several months that the two brands (Audi and Porsche) were negotiating partnerships to enter the highest class of international motor racing, which for much of the last decade has been dominated by Volkswagen’s German rival Mercedes.” It’s a few years away, but it’ll happen!

Pirelli’s F1 in-season testing programme for next year’s tyres got underway at Imola, with Alfa Romeo, AlphaTauri, Alpine and Ferrari trying out next year’s slick tyre prototypes in warm and dry weather.

Rally Croatia, round three of the Pirelli-equipped World Rally Championship, was won by series leader Kalle Rovanpera for Toyota. The Junior championship category, for drivers aged under 28, was won by another Finn, Lauri Joona, who now jointly leads the standings with Jon Armstrong.

Brands Hatch hosted the opening round of the GT World Challenge Sprint Cup last weekend. Raffaele Marciello and Timur Boguslavskiy won the event overall in a Mercedes to lead the driver’s standings, while Valentino Rossi scored his first points by finishing eighth in an Audi.